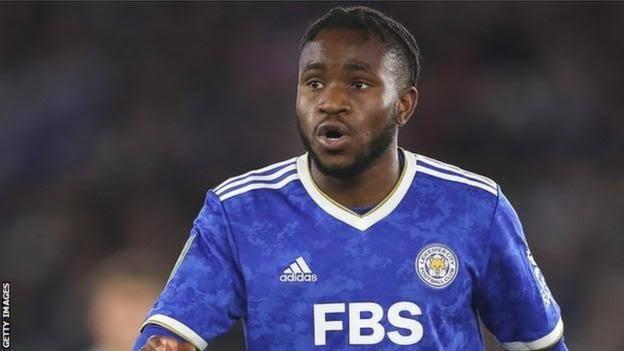 Ademola Lookman provided the assist for Wesley Fofana’s goal, which ensured that Leicester City progressed to the quarterfinals of the Europa Conference League despite a 2-1 loss to Rennes.

The Foxes beat Rennes 2-0 at the King Power Stadium last week, with Iheanacho scoring the second goal. And they faced a tough fight at the Rhoazon Park in the second leg as Rennes gave a good account of themselves in the first leg. But for the Brittany team’s profligacy in the first leg, it could have been a different conversation.

Rennes sprung to life early as Benjamin Bourigeaud opened the scoring in the eighth minute. Four minutes later, Leicester City coach Brendan Rodgers hauled off Marc Albrighton, who was struggling with an injury for Ademola Lookman.

Despite the early concession, the Foxes kept their cool. Ndidi was brilliant as usual on the night, he had three tackles and six clearances to help his side maintain the status quo till halftime.

Ademola showed his brilliance just six minutes after the break as he supplied the assist for Wesley Fofana’s equaliser.

After they restored parity, the Foxes opted to switch to ultra-defence. Unfortunately, Super Eagles midfielder Wilfred Ndidi sustained an injury just before the hour mark and had to be replaced with James Maddison.

His absence was sorely felt, as Flavien Tait scored for Rennes 16 minutes after Ndidi was taken off to help them regain the lead.

Iheanacho was decent on the night, but he could not offer much going forward. Nonetheless, he helped with defensive work, as he had three tackles.

Leicester City saw out the late onslaught from Rennes to ensure they progress to the quarterfinals of the Conference with a 3-2 victory.

However, Ndidi is now a doubt for Nigeria’s crucial World Cup qualifier against Ghana after he hobbled off the pitch with an injury.