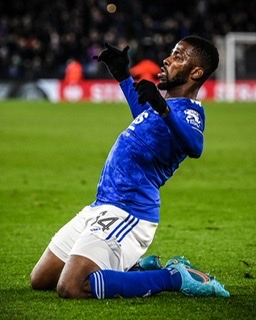 Kelechi Iheanacho scored at the death to put Leicester in a strong position going into the second leg of their fixture against Rennes.

Leicester scored through Marc Albrighton on the half hour mark but struggled to convert their chances in the game.

Super Eagles midfielder, Wilfred Ndidi was on for the entire duration of the game as he ran the show in the middle of the park.

Iheanacho replaced Patson Daka in the 62nd minute but didn’t make a significant impact in the game until the 93rd minute.

Albrighton turned provider just seconds to the end of the game after Leicester broke. After finding Iheanacho in a good position, the Nigerian curled a well-placed finish beyond Senegal goalkeeper, Alfred Gomis in the Rennes goal to score his first in Europe this season.

The goal will prove to be vital to Leicester’s chances of progression to the quarterfinal as they travel to France to keep their lead.

New Super Eagles invitee, Ademola Lookman was an 80th minute substitute in the game as he came on for Harvey Barnes.

Leicester will face Arsenal next in the Premier League when they travel to the Emirates.