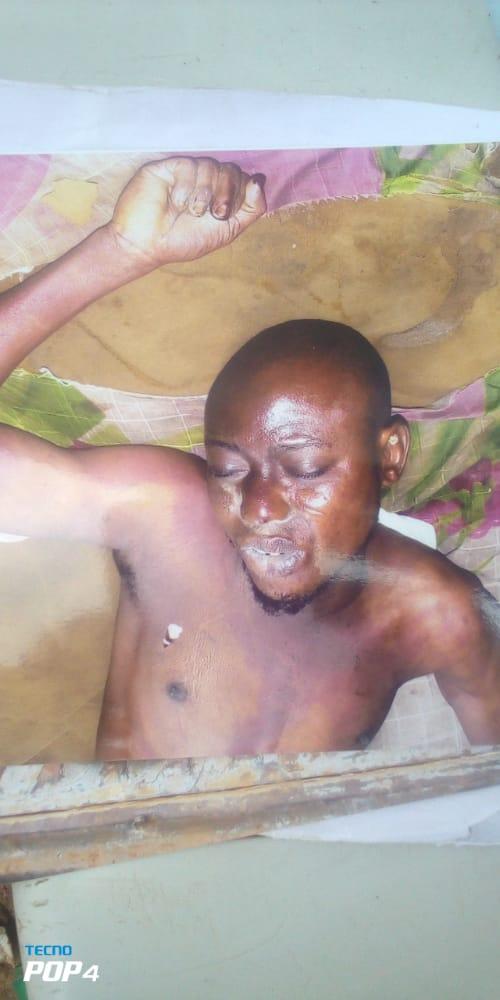 The Family of Ramoni Sulaimon have cried out for justice after a suspected land grabber identified as Nuru Akande Jegede, allegedly killed one Ramoni Sulaimon in Ogunrun Eletu village, Mowe in Obafemi Owode local government area of Ogun State.

The deceased family also accused the SWAT police in Abuja of being compromised over the case, saying that the killer was seen on the street with the aim that he was in prison after he was arrested by the police.
They also accused the alleged killer’s family to have conspired with the SWAT police in Abuja to come and picked the case file from Ogun state Police Command who were doing diligent investigation, but the case file was picked to Abuja just to jeopardize the whole investigation and thereafter release the suspect despite the autopsy report that collaborated the eye witness.

Speaking on behalf of the family, the deceased brother, Abdullahi Kolawole hinted that it was surprisingly that a crime that was committed in Ogun State could be said to have been transferred to Abuja and the suspect was in Suleja Prison.
According to him “On September 22 , I saw Nuru Akande Jegede at Abule Olosan Under Obafemi Owode local government .

“We confronted him and he said he has given the police money before he was released in police custody, and people prevent us from arresting him when we sought to know the particular police he said he gave money to, but people advice us not to take laws into our hand”
“I immediately called the IPO in charge of the case, he said there was nothing of such that Jegede is in Suleja Prison, but he later believed after I sent him video evidence while we were trying to re-arrest him, but unfortunately he escaped”, Kolawola narrated.

Kolawole who spoke to our correspondent, accused the alleged killer of accompanying Landgrabbers numbering over 20 to their family land on motorcycle, disrupted the activities on the land, seriously beat his late brother to stupor while others who were with the deceased fled and watched from far distance while he was beaten.
Other suspects included Rashidi Onikoyi, Chika Godwin among others.

Kolawole explained that the incident happened on 8th of June 2022 and his brother died following day adding that the autopsy confirmed that “severe cerebral edema with tonsillar herniation and soft tissue injuries with severe cerebral edema” was the cause of his death.
He explained further that after the case was reported, the suspect was arrested by the men of the Nigeria Police Mowe division in Obafemi Owode local government and was transferred to the command headquarters in Eleweran Abeokuta from where the SWAT police Abuja came to picked up the case file.

He therefore appealed to the Inspector General of Police and the Ogun state government to come to their aide by ensuring that the suspect was re-arrested and brought to book.
Kolawole also vowed that they will take necessary action under the law to get justice for their late brother saying that they had consulted their lawyer on the case.

Reacting to the incident, the Ogun State Police Public Relations Officer (PPRO) SP Abimbola Oyeyemi explained if needs call for it, Abuja police can come to a state to pick a case file adding that it’s only the Force PRO, Muyiwa Adejobi that can give full information on the case, but all efforts to reach him proof abortive.