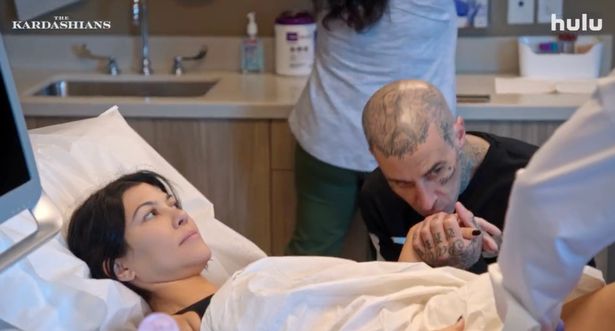 The Kardashians is coming to Hulu next month, but in the meantime there’s a sizzling trailer for fans to get stuck into.

Viewers were bereft when Keeping Up With The Kardashians finished last year, but now the gang are back in what promises to be an explosive new series.

All the Kar-Jenners have hit the headlines in recent months, but it was Poosh founder Kourtney, 42, who really got tongues wagging when she announced she was engaged to drummer Travis Barker, 46.

The heavily tattooed Blink-182 star seemed like an unusual choice for the mum-of-three, but after copious amounts of PDA, Travis popped the question on a rose-strewn beach.

Now in the trailer for the eagerly-awaited series, Kourtney reveals the couple are trying for a baby.

Alongside scenes of the rapper’s sentimental proposal, Kourtney purrs: “Travis and I want to have a baby.”

The next clips shows the drummer disappearing into a doctor’s office with his beau as a nurse instructs him to “put the sample in the cup”.

At this point, Kourtney muses it’s probably better to “take our mics off so we don’t get the audio”.

With a dramatic soundtrack and Hollywood-style cinematography, Kourtney confides to momager Kris Jenner that people ‘shouldn’t comment when they don’t know how hard the reality is’.

Then in true telenovela style the eldest Kardashian sibling is seen wearing a gown lying in a hospital bed as Travis kisses her hand.

The drummer has two kids, Alabama and Landan and is also a stepfather to his ex’s Shana Moakler’s child.