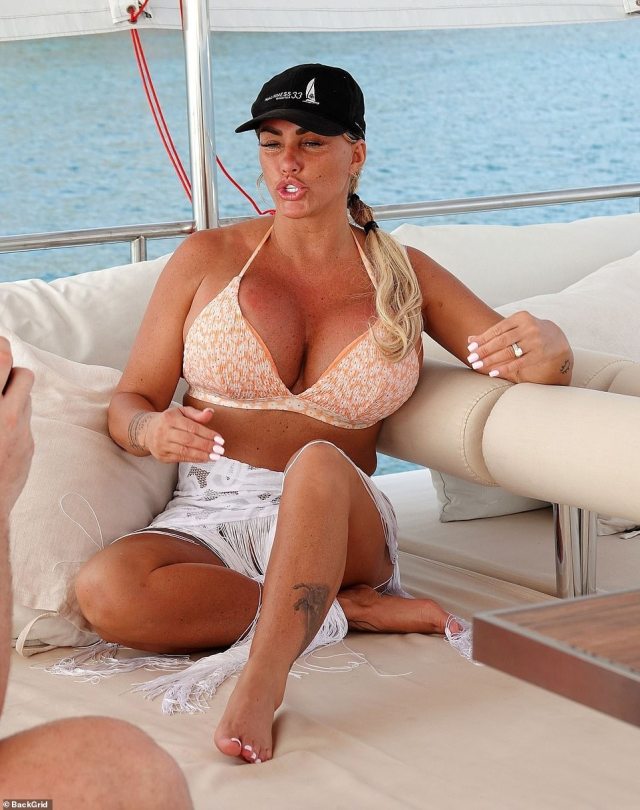 Katie Price Reveals The Results Of Her 13TH Boob Job

Katie Price’s unveiled the results of her 13th boob job while on a boat trip with her fiancé Carl Woods during their holiday to Thailand on Tuesday.

The former glamour model, 43, reportedly had her latest boob job and full body liposuction with bum fat removal, at the BeClinic in Overijse, Belgium in December.

According to The Mirror, Katie’s family are ‘horrified’ at her latest procedure and are said to be disappointed surgeons agreed to perform on her.

A source said: ‘It’s getting really silly now and more than a little irresponsible. Everyone’s quite horrified, to be honest.

Katie’s mother Amy previously admitted she fears her daughter might have body dysmphoria, telling The Sunday Times: ‘She doesn’t tell me now because she knows I’ll go ballistic.

‘Maybe she does it because she doesn’t feel she’s attractive enough, or maybe it’s body dysmorphia. Part of the problem is she gets her surgeries free, so someone is always capitalising on her name.’

The mother-of-five had her first cosmetic surgery at the tender age 18 where she had a boob job taking her breasts for a B cup to a C cup and had her first liposuction.

Beautiful photos of BBNaija star, Tboss and her daughter

Prince Okojie’s Reaction As He Bumps Into Wife, Mercy Johnson Wearing his Expensive Shoe For A Video Shoot (Video)