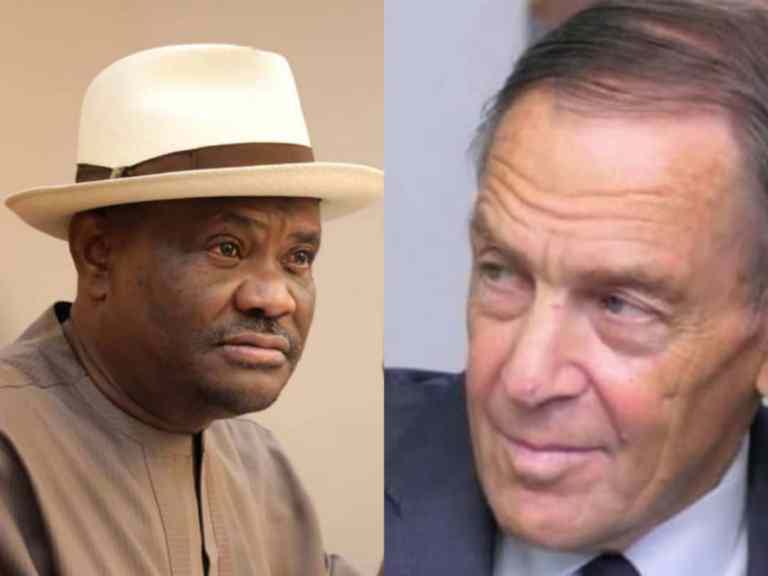 A United States (US)-based lawyer, Bruce Fein, who is a counsel to the leader of the proscribed Indigenous People of Biafra (IPOB), Nnamdi Kanu, has dragged Rivers State governor Nyesom Wike, before the International Criminal Court (ICC) with a criminal complaint.

According to a report by Leadership, in a petition to ICC chief prosecutor, Karim Khan, in The Hague, he accused Wike of conspiring with President Muhammadu Buhari to allegedly kill over 3,800 Biafrans.

The accused Ezenwo Nyesom has lent his authority as Governor of Rivers State to assist in genocide and crimes against humanity is elaborated anon. Among other things, Wike (allegedly) orchestrated the massacre of more than 3800 Biafrans in the Obigbo area of Rivers State in October 2020 as part of an ongoing and widespread and systematic attack by the Fulani- controlled Federal Government of Nigeria, against the Biafran civilian population in the southeast,” part of the petition reads.

The Nigerian security forces, at present structured along Northern Muslim lines and deployed in Eastern Nigeria had in fourteen months or between late October 2020 and Dec 2021 killed not less than 1,150 defenseless citizens of Eastern Nigeria. All the victims are members of Judeo-Christian Faith and mostly ethnic Igbo citizens. Their killings represent a monthly average of 85 deaths and daily average of three and could be monthly average of 155 and daily average of 5.5 deaths if the presumed dead 1000 missing citizens are added,” the petition stated.

The security forces also abducted and disappeared till date in the same past 14 months at least 1000 unarmed civilians; arrested alive and unarmed and taken into security custodies outside the knowledge of their families or lawyers, from where they have gone missing till date, ” it added.

The petition further stated that soldiers of the Nigerian Army are found to be responsible for at least 70 percent of their abduction and disappearances while DSS, NPF, Nigerian Navy and Nigerian Air Force are separately and jointly responsible for the remaining 30 percent.

It said in the area of ‘perpetrator ratio’, soldiers of the Nigerian Army and various ‘special squads’ of the Nigeria Police Force are the lead-killers or perpetrators, alleging that the trio of Governors Hope Uzodimma of Imo State, Nyesom Wike of Rivers State and Dave Umahi of Ebonyi State are the most vicariously culpable governors that aided and abetted the killings and property destruction including burning of civilian homes and sanctuaries.

It added, “On the other hand, the widely believed Nigerian State protected jihadists especially … herdsmen are responsible for hacking to death in 2021 alone of at least 270 Igbo Christians. Their death had majorly occurred in Ebonyi, Enugu, Anambra, Imo, Abia and Igbo parts of Delta, Edo (Obiaruku and Igbo-Akiri), Benue and Kogi States.

The killings by …herdsmen have brought the total number of defenceless citizens traceably killed in Eastern Nigeria in the past 14 months to at least 1,400. This is when added to 1,150 defenseless civilian deaths perpetrated by security forces. The death toll could be 2,400 if 1,000 missing/presumed dead citizens are added. It is therefore likely correct to say that in all, not less than 2,400 unarmed civilians lost their lives to Nigerian security forces and the Jihadists in Eastern Nigeria in the past 14 months-covering October 2020 to December 2021.