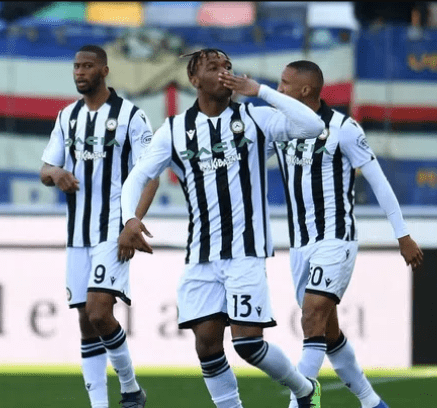 Juventus are putting the finishing touches to a cash-plus-player deal that will see Udinese defender Destiny Iyenoma Udogie sign for the Turin giants in the summer, according to Tutto Udinese.

Udogie has emerged as a primary transfer target for Juventus after the 19-year-old’s match-defining performances in recent weeks.

In just his first-ever season in the Italian Serie A, Udogie has already amassed 23 appearances for Udinese.

The versatile teenager has, however, added goals to his output, scoring the equaliser in his side’s 1-1 draw at the San Siro penultimate weekend before netting what proved to be the winner against Sampdoria last weekend.

The €7 million-rated wing-back is currently on-loan from Hellas Verona, but Udinese have the obligation to sign him permanently come June.

But Juventus could throw all of the Little Zebras’ plans into the trashcan by offering young, highly-rated Italian midfielder Filippo Ranocchia and cash for Udogie.

An Italian youth international, Udogie remains eligible to represent Nigeria, the country of birth of his parents.

Osimhen is not like Cavani, he must reduce his running – Ex-Italy striker