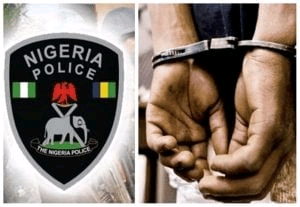 Operatives of the Police Command in the Federal Capital Territory (FCT) have arrested three suspects over alleged robbery on Old Gwarinpa Road area of Abuja.

The Police Public Relations Officer in the FCT, DSP Josephine Adeh, said this in a statement on Sunday in Abuja.

Adeh said the suspects were arrested in the early hours of Saturday following a distress call over robbery operation in the area.

She said an ash colour Mercedes Benz GLK 350 with Registration number, GWA 740 FM, laptops, mobile phones and other valuables, stolen from the victims were recovered.

READ ALSO : ‘My wife just had a baby’ – Bayelsa’s big boy arrested in Abuja over kidnapping cries out

Adeh said preliminary investigations had shown that the hoodlums, numbering about 10, invaded the area and robbed residence of their valuables.

According to her, upon the receipt of the distress call at about 4.00 a.m. police operatives from both Gwarinpa and Life camp Divisions were drafted to the area.

She said the hoodlums, however, fled the scene on the arrival of the police team but added that, with the coordination of the Command Control Room the team trailed the suspects.

“The surveillance team from Maitama Division were equally mobilised before the interception of the vehicle at Amingo, Wuse 2 area of the FCT,” she said.

She said the suspects were currently being interrogated while efforts were being intensified to arrest other fleeing members of the syndicate.

Adeh said the suspects would be arraigned in court upon completion of investigations.

She said the Commissioner of Police, (CP) in charge of FCT, Mr Babaji Sunday commended residents for the prompt information on the robbery.

Police nab 3 over robbery in Abuja