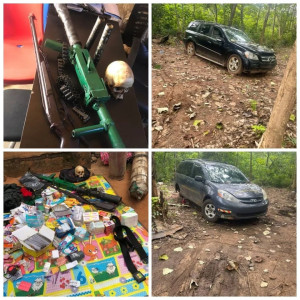 The recovery came following a counter-offensive operation launched against criminal elements who had on 9/7/2022 ambushed and killed two Police officers and a civilian car tracker who were on the trail of a criminal gang that snatched a Toyota Sienna Space Wagon vehicle at gun point on 9/7/2022 in Oye-Agu Abagana. The other Four Police Officers in the Team had gallantly fought their way through the ambush to safety killing some of the insurgents.
In the counter offensive operation that followed, three insurgents’ camps were destroyed and high grade weapons recovered.

The remains of the two murdered police officers and the civilian tracker have been recovered and deposited in a morgue. Effort is ongoing to hunt down remnants of the insurgents who murdered the civilian tracker and the two Police Officers.
The Commissioner of Police in Anambra State Command, CP Echeng Echeng while condoling the families and friends of the murdered civilian and the police officers, described the incident as a classic example of the risk and sacrifices the police are exposed to in the onerous task of serving and protecting the country.

He also assured Ndi Anambra that efforts are being intensified towards total reclamation and domination of all public spaces occupied by hoodlums in the State and that no effort will be spared in bringing the hoodlums and their accomplices to justice.