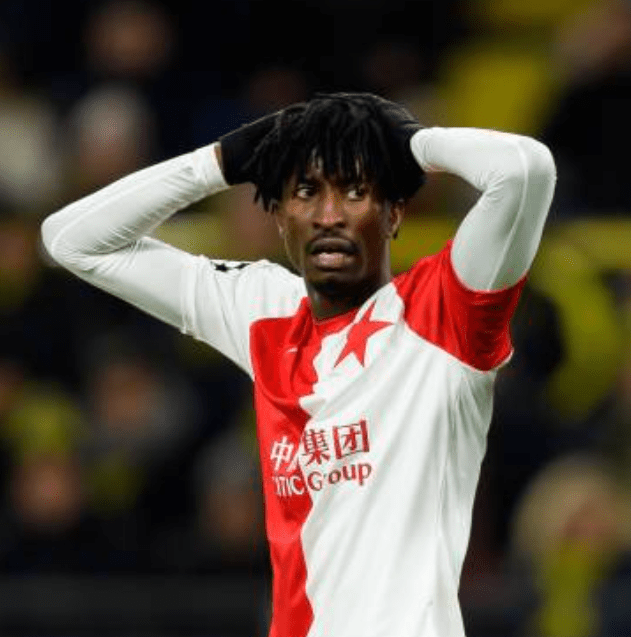 After securing a brilliant 4-1 win over LASK Linz – Olayinka scored the third goal – in the Europa Conference League on Thursday, Slavia were looking to claim their 20th league triumph of the campaign.

But Czech champions Slavia Prague received a massive shock in Liberec as their excellent winning run of eight straight matches came to an abrupt end on Sunday courtesy of a Peter Olayinka own-goal.

Olayinka miskicked a clearance past goalkeeper Ondřej Kolář in the 13th-minute, handing a precious lead to Slovan Liberec inside the Stadion u Nisy.

And despite having to play the second half with ten men after Lukáš Štetina’s dismissal late in the first half, the home side held on for a win that dampened their visitors’ title hopes.

Olayinka, one of the Red-and-white’s most exciting attackers, would be disappointed to emerge as the villain with the league title at stake.

But Slavia defender Holeš has absolved the Nigerian international of any wrongdoing.

“I don’t remember much (about the goal); there was a center on the back pole,” the 28-year-old full-back said after the match, as per the club’s official website.

“Olie (Olayinka) wanted to kick it off, hit it badly, and kicked it at the goal. It rumbled on a pole or a crossbar. I’m not entirely sure if the ball was behind the line, but the referees probably saw it. It was an unfortunate moment.”

The loss demoted Slavia to second on the Czech Liga, three points behind Victoria Plzen.

But instead of blaming Olayinka, Holeš was certain the terrible condition of the pitch at the Stadion u Nisy played a significant part in Slavia’s poor performance and hence the defeat.

“The match was played on terrible terrain; I probably haven’t played on a worse pitch yet,” Holeš added.

“It affected an early goal, which we scored ourselves. Then after the red card, the home team retreated and fought teeth and nails to protect the lead.

“We couldn’t play what we were used to. We tried to get centers; we tried to establish ourselves there. Unfortunately, we hit a bar and a crossbar. We didn’t want to but we lost.”

Played mainly on the flanks, Olayinka has notched eight goals and four assists in 31 matches across all competitions for Slavia Prague so far this season.

The 26-year-old was a member of the Super Eagles squad to the 2021 Africa Cup of Nations in Cameroon.