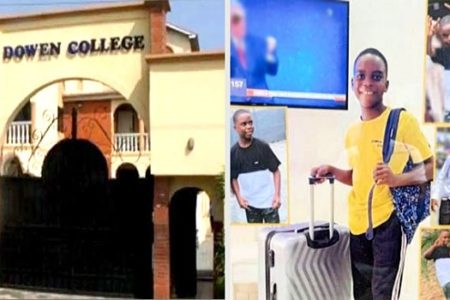 A Consultant Pathologist at the Central Hospital, Warri, Delta State, Dr Clement Vhriterhire, who carried out the initial autopsy on late Sylvester Oromoni (Junior), a pupil of Dowen College, Lekki, who died in controversial circumstances, on Monday, told a coroner that the pupil died of pneumonia leading to sepsis.

The news of Sylvester’s death went viral following a social media post by his cousin, Perry Oromoni, who alleged that some senior pupils of the college beat him up in his hostel because he refused to join a cult.

But the school denied the claim, stating that the boy complained of leg pain following an injury he sustained while playing football.

A coroner inquest was subsequently set up to look into the matter.

Vhriterhire’s testimony on Monday aligns with that of Dr Sokunle Soyemi, a pathologist at the Lagos State University Teaching Hospital, Ikeja.

The physician, while being cross-examined, said he was served coroner papers by the police to carry out a post-mortem on December 2, 2021, on the corpse of Sylvester.

He said prior to the operation, he was told that the deceased was beaten.

Vhriterhire said, “I expected to see clear evidence of severe beating and injury on the corpse as to the alleged cause of death.

“Upon physical examination of the body, externally looking at the body, I did not see any open injury.

“I should be seeing evidence of significant bleeding in the abdominal cavity; by the time I opened the cavities, I did not see signs of beating.”

When asked if the victim’s father revealed the nature of beating to the pathologist before he began the autopsy, he replied in the negative.

He said, “Your honour, I can’t remember getting information of the boy being beaten with any instrument.

“I did not see any evidence of ruptured internal organs.”

The doctor further said when he called Mr Oromoni to tell him his findings, “at that point, the father said in the process of being beaten that he was forced to drink a substance.”

“At that point, without such information but in the middle, I thought he might have ingested something.

“I opened the stomach; in the stomach was a chocolate-coloured material,” he added.

The pathologist, who also claimed to be a pastor, was questioned by Coroner Mikhail Kadiri on what he would say to the allegation that beating and chemical poisoning led to the boy’s death.

He told the court that some answers were not simplistic.

Vhriterhire, however, said, “Nothing will give credence to the allegation that he died by chemical intoxication. I didn’t see any injury that can explain death. No evidence of such gravity to explain death.”

The witness, under cross-examination by counsel for Dowen College, Mr Anthony Kpokpo, said septic shock was a possible cause of death.

The Oromoni’s family lawyer, Mr Femi Falana, asked about the bruise he saw on the deceased.

He said, “When I reflected on the back, there was this hue that may have been inflicted months earlier.”

He agreed that a massive dose of antibiotics, blood transfusion, intravenous fluid, and other earlier recommendations of Dr Soyemi could have saved the child.