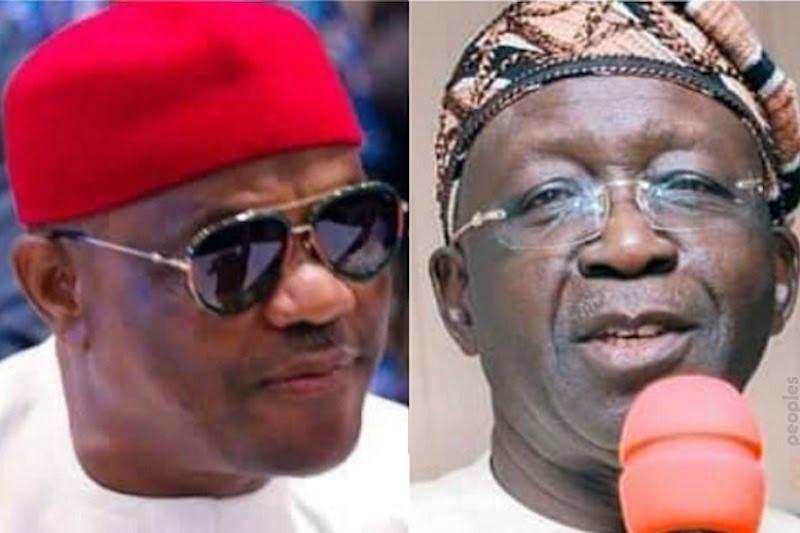 Renewed efforts by the presidential candidate of the Peoples Democratic Party, Atiku Abubakar, to resolve the lingering crisis between him and the Governor of Rivers State, Nyesom Wike, failed again as their Thursday meeting could not resolve the crisis.

It was gathered that the governor insisted there that would be no peace deal until the National Chairman of the party, Iyorchia Ayu, resigned his position.
The party has been plunged into crisis since its presidential primary in May. Wike, who lost to Atiku, had expressed dissatisfaction with the exercise, stating that he was unfairly treated by the PDP and was not carried along. Reports said he was further dissatisfied with the emergence of Governor Ifeanyi Okowa of Delta State as Atiku’s running mate.
Wike had insisted that Ayu must resign if his camp must reach a truce with the candidate, but Atiku had said he had no powers to remove the chairman. Atiku said if the chairman must be removed, due process must be followed in accordance with the party’s constitution.
After a series of meetings between them and their representatives failed to address the crisis, Wike and some of his colleagues and allies boycotted the inauguration of the party’s presidential campaign council on September 28.

Some of his allies absent at the inauguration are governors Seyi Makinde, Samuel Ortom, Okezie Ikpeazu and Ifeanyi Ugwuanyi of Oyo, Benue, Abia and Enugu states, respectively.
Others who also boycotted the event were Prof Jerry Gana; and former governors Ayo Fayose, Jonah Jang, Donald Duke and Olusegun Mimiko. A former deputy national chairman of the party, Chief Olabode George, was also absent.
Meanwhile, in a fresh move to placate Wike, especially as the presidential campaigns began on Wednesday, Atiku again met with the governor on Thursday at his private residence in Asokoro, Abuja.

One of Wike’s close allies, who was privy to what was discussed at the meeting, Senator Olaka Wogu, in an interview said the governor reiterated his demand to the former vice-president that there was no going back on his demand that Ayu must go.
He affirmed that the meeting between Atiku and Wike ended in a stalemate after the governor stood firm on his demands.
Wogu stated, “I just want to set the record straight that no matter what you have heard, the meeting ended because Wike stood firm that there was no basis for any resolution until Ayu stepped down.

“Every other thing can be discussed, whether it is 2027 or not after the needful has been done. This will put the party in a position where the national chairman can go to every state to campaign for the party. There are some states where Ayu may not be welcomed.”
Wogu, a former lawmaker, dismissed reports that Atiku offered to support Wike for president in 2027, stressing that there was no such discussion between them. “Talks are still ongoing between them and I know that there will be continued talks between them,” he added.
When prodded to speak on the reported agreement between them, Wogu said, “There is nothing like that. I told you that talks are still ongoing between them. I won’t lie to you, but I cannot disclose the content of the meeting; the idea is to find whether they can reach an agreement.

“As you know, Wike has stood his ground that Ayu must leave for a sense of fairness, equity and for what is right. He should go. This was even compounded by the fact that Ayu himself said he would go. So, as a matter of honour, he should go.
Before now, Atiku had said that there were constitutional challenges to his (Ayu’s) removal. So between pleasure and force, we will explore the option. That was what Atiku said in London. This is like a follow-up; they are talking.”
Wogu also expressed his thoughts on the over N100m housing allowance returned by some National Working Committee members of the PDP.

Recall that some NWC members, including the Deputy National Chairman (South), Taofeek Arapaja; National Woman Leader, Prof Stella Effah-Attoe; and the National Vice Chairman (South-South), Chief Dan Orbih, returned their housing allowance into the party’s coffers.
This came after Ayu was accused by the Rivers State governor of inducing the NWC members with huge sums of money in a bid to conceal his alleged financial recklessness.
Commenting on the development, Wogu said, “What is going on now is that we are shocked by the things that are coming out of the NWC. We have a major election to go to and we must inspire Nigerians and show that we want to get it right. We cannot, like Nero, watch while Rome burns.

We cannot be on these things while the base of the PDP is being eroded on all fronts. The Labour Party is taking PDP supporters; the NNPP (New Nigeria Peoples Party) is taking PDP’s supporters and we are just wasting our time on these things. If Ayu is good enough for the party, we will reap the reward.
“Nigerians are not fools. What may happen is that people may judge us on those standards and those standards are not good enough for us. Nobody should be able to lead Nigeria with such happenings, no matter how you try to shield it from the public.

“How can we watch our youths speak to us as they are doing through their support for Peter Obi and we still don’t want to listen? We don’t want to hear, we are acting with the same arrogance by which we lost power the other time.”
He said while the APC was not in order, the PDP was not taking advantage of it but was rather engaging in needless issues, adding, “I appeal to the PDP to do the needful. We cannot go to an election in disunity and then expect a positive or desirable outcome. If we cannot unite our party, how can we unite a country?”
Responding to a question on whether Wike would officially declare support for a different presidential candidate other than Atiku, Wogu said the governor would make his intention known at the right time.

The presidential candidate of the Labour Party, Peter Obi, had met with the governor on a few occasions, fuelling insinuations that he might be making moves to enlist Wike’s support.
Wogu added, “Wike has said he would openly declare his stand when we get to that point. He had a meeting with his leaders the other time and took a decision to withdraw from the campaign council. It is not unilateral because all the leaders came, spoke at the meeting and the decision was reached. You can’t do this kind of thing by yourself.
“The group has grown beyond him alone. Everybody will sit, people will give their opinions and the decision will be made.”