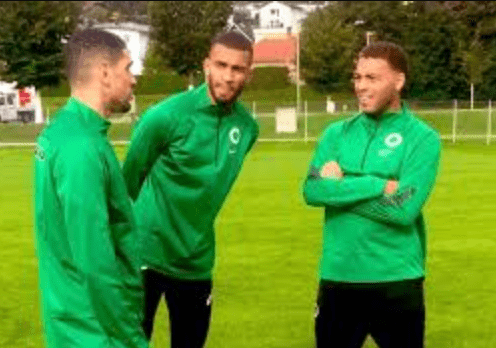 Dutch manager Marinus ‘Mario’ Been believes that Super Eagles striker Cyriel Dessers does not have the quality to help Eredivisie side Feyenoord challenge for domestic and continental titles.

That appears like a harsh take on Dessers, who has been nothing short of outstanding for Arne Slot’s men since joining on a season-long loan deal from KRC Genk in the summer. Feyenoord retain the option to part with €4 million and keep the Nigerian beyond June.

The 27-year-old netted his 11th goal of the campaign for Feyenoord in midweek and claimed another assist to help power his side to a convincing 5-2 win away to Partizan Belgrade.

Even more remarkably, that Dessers’ goal came in just his fourth start for the Pride of South, with head coach Slot preferring Bryan Linssen as his leading striker.

The Dutch forward has struggled in front of goal for several weeks, and Dessers has made it clear with his performances (two goals in his last two games) that he is ready to lead the attack for Feyenoord.

But ex-Genk manager Mario Been is not convinced that either Linssen or Dessers is the long-term solution to Feyenoord’s attacking woes.

Been is even more critical of the one-cap Super Eagles star, suggesting that it will not be competent for the Rotterdammers to complete Dessers’ permanent signing as the former Heracles man is overvalued at four million euros.

“Lindsey has been dry for quite some time now,” Mario Been told the Dick Voormekaar Podcast, as per Voetbalkrant.

“But before that period, he did very well for the team. He has scored eleven goals. But you could now see whether Dessers is the right man to take you a little further.

“In the longer term, I don’t think they are suitable for taking Feyenoord further. That is for the simple reason that Linssen is not a natural striker. And if you want to play a significant role in Europe and the Eredivisie, you will have to have a really good striker.

“Dessers must then cost four million; I don’t think he is worth that, I say that very honestly. That is a lot of money.”

Feyenoord presently sit third on the Eredivisie table behind Ajax and PSV, while the Club of the People has a foot in the quarterfinals of the Europa Conference League.