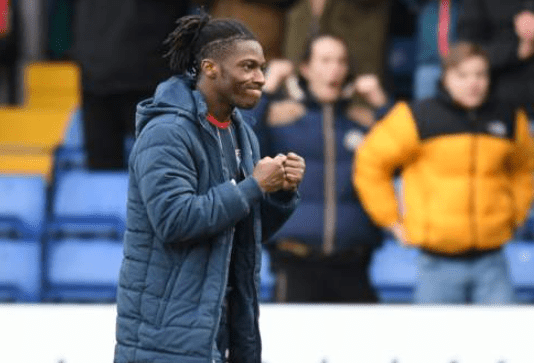 Ross County manager Malcolm ‘Malky’ Mackay has expressed his delight with the goalscoring form of youngster Joseph Oluwagbemiga Hungbo, following the winger’s exploits in the 1-0 win over St. Mirren on Saturday.

An exciting, versatile winger on his day, Hungbo struggled to find his feet at Crystal Palace, Margate, and Aldershot Town, places he had previously spent time.

Currently on the books of English Premier League side Watford, the 22-year-old is on loan at Ross County until the end of the season.

Hungbo has, however, settled remarkably well and is flourishing at Victoria Park. The Lambeth-born star already has six goals and three assists in 25 Scottish Premiership games.

Hungbo has scored goals in each of his last three games, two of which
have been match-winning penalties against Motherwell and St. Mirren.

The three consecutive victories have lifted Ross County out of the relegation half to sixth on the league table, and the Staggies’ boss is in no doubt that Hungbo has been key to that fine run.

Talking to BBC Sportsound, Mackay said, “Great credit to young Joe [Hungbo] because the confidence now from the boy who walked in at the start of the season to the man that’s beginning to grow – I’m delighted. He’s a terrific young lad.

“No goalkeeper’s saving that penalty today. My challenge to him actually was to try and score another five goals between Christmas and the end of the season and he’s getting there.”

Arguably the biggest challenge of the season awaits Hungbo and Ross County next as they make the trip to face leaders Celtic at the Celtic Park in Glasgow on March 19.