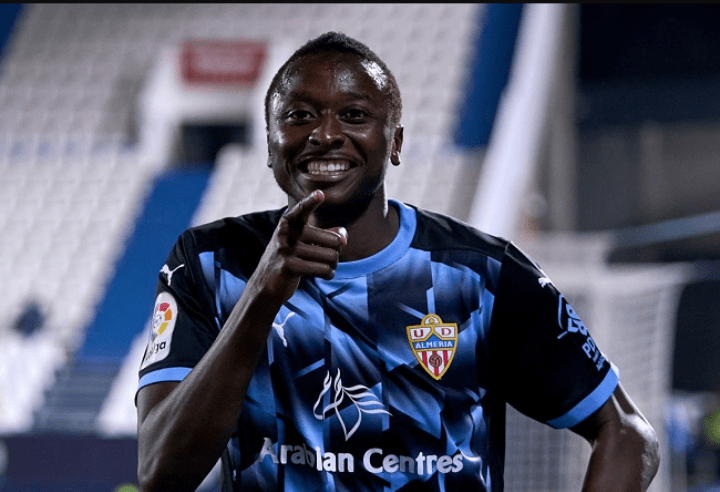 The Kaduna-born forward has arguably been the best striker in the Spanish second-tier over the past one and a half years, and he is believed to be tailor-made for the top-flight

Udinese forward Isaac Success has urged compatriot Umar Sadiq to prepare for a tougher challenge when he eventually makes his long-anticipated move to the Spanish Primera Division.

Sadiq has been a terror to defenders in the Segunda Division since joining Almeria in 2020, with the former AS Roma starlet seemingly scoring goals for fun.

In just 63 La Liga Smartbank games, the Nigerian international has contributed 49 goals (33 goals and 16 assists) to become the most valuable player in the Spanish second-tier.

Sadiq’s stunning goal record has seen him become the transfer target of some of Europe’s biggest clubs, but Sevilla are believed to lead the race for his signature. If the deal is completed, it would be the first time Sadiq will play in any of Europe’s five biggest leagues since his last Serie A appearance for Roma in 2017/18.

Success is no stranger to Spanish football, having spent three years at Granada and half a season at Malaga.

And the 26-year-old has warned Sadiq to be prepared for the challenge awaiting him in La Liga and potentially in Europe.

“Sevilla FC is a great club, and going from Almería to there can be somewhat difficult,” Success told Estadio Deportivo.

“There are many more competitions such as the Europa League, the Champions League. It is something different. But if he has come this far and manages to connect with the club, his teammates, and the city, of course, it could be possible.”

Sadiq made his debut for the Super Eagles at the 2021 Africa Cup of Nations in Cameroon earlier this year and has been included in the squad to face Ghana in a World Cup qualifying playoff later this month.

Success will not be involved in the two-legged ties, having not been invited to the national fold since 2018, with Nigeria blessed with an abundance of attacking players.

Success admits he knows little about his compatriot beyond what he watches on television, but he agrees the Almeria man is tailor-made for international and European football.

“I don’t know him personally, but I’ve seen some of his games for UD Almería and for the national team during the Africa Cup. He’s a good player, although physically he’s not that good, but he has the technique and a lot of quality.

“At Almería, he’s doing things very well; he’s scoring a lot of goals and giving a lot of assists. That’s good for European football because we have a lot of strikers in Europe who are very good. Standing out as a striker is difficult.”

Sadiq’s 13 goals and nine assists in 25 league games make him the top man for Almeria.