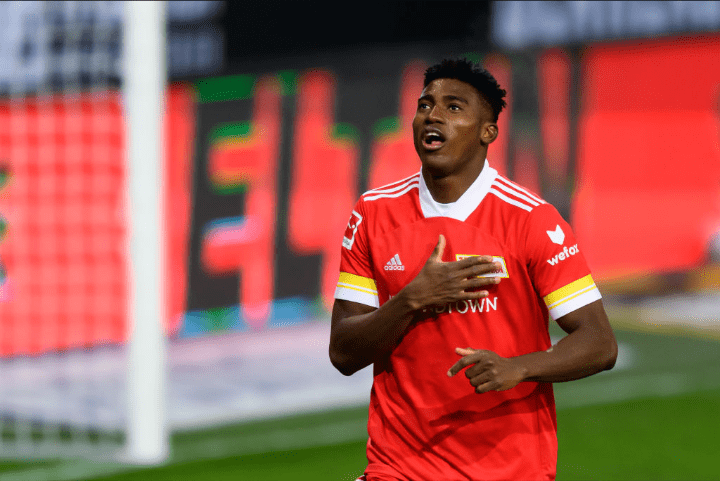 Super Eagles striker Taiwo Awoniyi impressed as Union Berlin booked their spot in the semifinals of the DFB Pokal after recording a come-from-behind 2-1 win over Afeez Aremu’s St Pauli on Tuesday evening.

Taiwo Awoniyi came off the bench at the weekend to net his side’s last goal in the 3-1 defeat of Mainz, ending his mini-goal drought.

And with his impressive stat of a goal and an assist in two German cup games this term, it was no surprise to see the Nigerian international return to the Iron Ones’ first eleven on Tuesday.

In a similar vein, former Akwa United defensive midfielder Afeez Aremu made the starting eleven for the high-flying lower league outfit, who were aiming to continue their fairytale run in the competition.

Despite the presence of the two Nigerians, it was Ghana international Daniel-Kofi Kyereh who made his impact felt early on dor the Bundesliga 2 side.

St Pauli shocked many when they sent German Cup holders Borussia Dortmund packing in the round of 16. And they were in a confident mood ahead of this clash after beating Ingolstadt 3-1 away on Saturday.

And the momentum was firmly in their corner when they broke the deadlock through Daniel-Kofi Kyereh after just 21 minutes.

It was a goal against the run of play, but it gave the visitors something to hold on to and fight for.

But Union Berlin aimed to write a beautiful story of their own, having never won the DFB Pokal. And it was clear the Berliners would be giving as much as they get when they equalise on the stroke of halftime.

It should have been Awoniyi’s second goal in the competition, though, but the Super Eagles striker watched as goalkeeper Dennis Smarsch saved his shot in a one-on-one situation. The rebound, however, fell kindly to Sheraldo Becker, who stabbed it into the net to level proceedings.

St Pauli’s manager responded by hauling Aremu off at halftime, and Awoniyi joined his compatriot on the substitute bench midway through the second period.

His replacement, Andreas Voglsammer, then got the all-important winner in the 75th minute when he took the ball through on goal and slot into the net.

Union Berlin held on for the win to leave themselves one victory away from reaching their first DFB Pokal final since 2001 when they lost to Schalke 04.

Awoniyi, though, will now be more familiar with Ghana’s Kyereh, the attacker who almost cost him a semifinal ticket.

The two strikers could yet again line up against each other later in March when Nigeria do battle with Ghana for a place at the 2022 FIFA World Cup in Qatar.