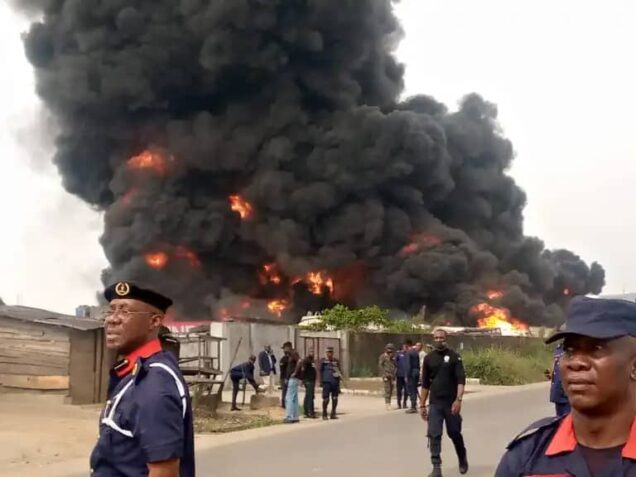 Over 30 trucks filled with assorted types of Petroleum products impounded from suspected illegal artisanal refiners were gutted by fire from a a massive an explosion at the depot of Nigeria Security and Civil Defence Corps,NSCDC, Iriebe, in Obio-Akpor local government area of Rivers State on Monday.

The management of Rivers Command of NSCDC Command blamed the incident on saboteurs who may have thrown explosives at the parking lot of the seized petroleum products dump site.

The fire burnt several other buildings as well, a cement depot and vehicles in the vicinity of the depot.

According to an eyewitness, “It looked ridiculous that the first fire service tanker that came there didn’t have water, when they came the started looking for water. The fire is serious”.

The Spokesman of NSCDC in Rivers, Ayodeji Olufemi confirmed the fire disaster at the dump yard of the command in Iriebe.

He blamed the fire incident on saboteurs who he alleged set the facility ablaze to destroy the seized illegal artisanal refined Petroleum products to eliminate exhibits meant prosecuting suspects.