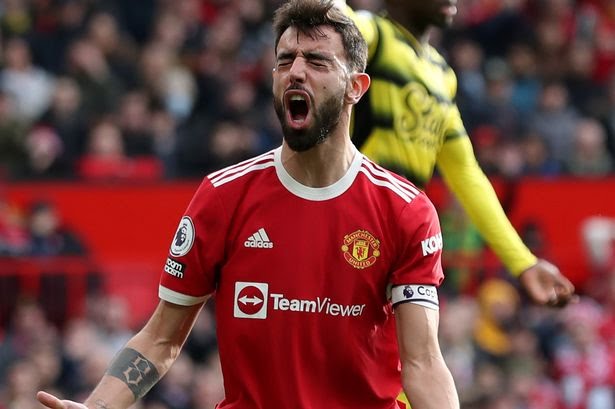 Bruno Fernandes has rated Manchester United’s top four chances following Arsenal’s recent surge in form.
Manchester United played out a 0-0 draw with Watford at the weekend while,
Arsenal defeated Wolves 2-1 on Thursday.
Arsenal are now two points adrift Manchester United on the table with three outstanding matches.
Fernandes believes that Manchester United need to beat Manchester City in their next game to improve their chances of securing a Champions League ticket.
“As I said many times,we dropped points for the third (position), that’s the main point for us,we could be one step closer than them” he told MUTV.

“But now is not the time to start how many we should have or how many points we will have at the end,we need to look to the next game.”
“It’s one of the games, you know what it means to the city and the fans, for the club and ourselves,it’s one of the games you want to win at all costs.”
Arsenal will play Watford in their next game as they look to keep pace with the fourth placed Manchester United
Fastest Paying Betting Site in Nigeria: Grab your 140% First Time Deposit Bonus Now — www.Sportybet.Com Copyright © 2021 Completesports.com All rights reserved. The information contained in Completesports.com may not be published, broadcast, rewritten, or redistributed without the prior written authority of Completesports.com.