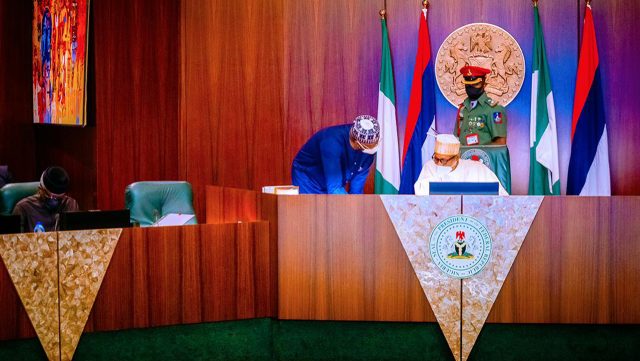 The Federal Executive Council (FEC) on Wednesday in Abuja approved over N14 billion to train 50,000 non-graduates of N-power for a period of nine months.

The News Agency of Nigeria (NAN) reports that the meeting, which was presided by President Muhammadu Buhari, also approved Business, Facilitation and Miscellanceous Provision Bill.

The Minister of Humanitarian Affairs, Disaster Management and Social Development, Sadiya Umar-Farouq, and the Attorney-General and Minister of Justice, Abubakar Malami, made these known when they briefed State House correspondents on the outcome of the council meeting.

Umar-Farouq explained that the N14 billion would be used to engage four federal government agencies that will be involved in the training of the non-graduates for a period of nine months.

She said: “Today, the Ministry of Humanitarian Affairs, Disaster Management and Social Development submitted a memo to Council, asking Council for approval for the engagement of four Federal Government Agencies that will train our N-Power non-graduate beneficiaries.

“These non-graduate beneficiaries, 50,000 of them, will be trained in different skills, using four government agencies as mentioned.

She added that at the end of the training the beneficiaries of the programme would be handed starter packs to start up their businesses.

READ MORE   CBN Interest Rate Hike: What You Need to Know and How It Affects You

The Attorney General of the Federation and Minister of Justice, Abubakar Malami, also told the correspondents that the council approved the Business, Facilitation and Miscellaneous Provision Bill to consolidate on the reforms and enhance productivity and value.
He explained that the bill was part of government’s efforts to sustain the legacies achieved through the Presidential Enabling Business Environment Council (PEBEC).

The minister revealed that the bill would be forwarded to National Assembly for consideration.

On the ruling by a Federal High Court in Umuahia, Abia, that ordered the attorney-general of the federation to delete Section 84 (12) of the amended Electoral Act, Malami said his ministry was yet to effect implementation of the ruling.

The section reads: “No political appointee at any level shall be a voting delegate or be voted for at the convention or congress of any political party for the purpose of the nomination of candidates for any election.”

According to him, the process of implementing the ruling is still on.

He said: “My clear response arising therefrom is the fact that truly there exists a court judgment.

“By the judgment, the court directed the Office of the Attorney General to take the necessary steps to delete the provision, which in essence implies that the provision should not form part of our laws.

“Whether it has been deleted, or has not been deleted, is indeed a function of agencies of government and associated relevant parastatals.

“But the true position of it in that respect, is the fact that government printers, and indeed Law Reform Commission, among others, that are responsible for the codification and gazetting of our laws, are working naturally, hand-in-hand with the Office of the Attorney General for the purpose of ensuring that what goes into our laws are indeed in line with the provision of the law.

“So, what I am saying in essence, it is indeed a work in progress against the background of the fact that the Law Reform Commission is involved statutorily, which is a parastatal under the Office of the Attorney General, is a party to the process of codification.

“The government printers, which is saddled with the responsibility of gazetting our laws on the request of the Office of the Attorney General is equally involved. And above all, as you rightly stated, the possibility of an appeal is equally there.

“So, what I am saying in effect is deletion of Section 84 Subsection 12 is a work in progress and is being considered as such.”

I Studied At Four Universities Before Graduating – Mr Macaroni