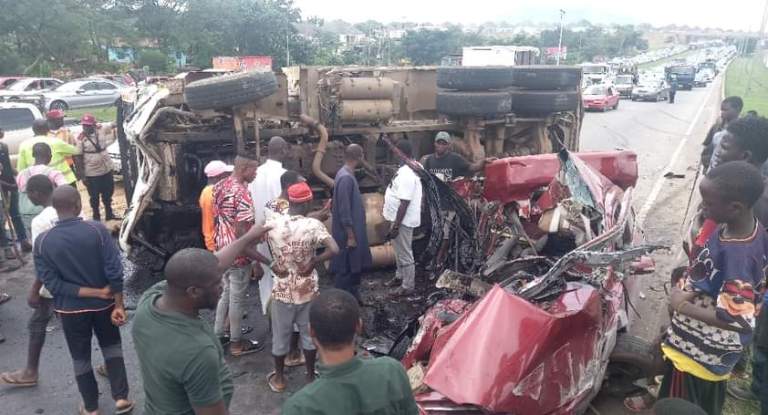 Four persons on Friday escaped death by whiskers in Abuja when a truck crushed a Toyota Corolla along Kubwa Expressway.

The incident occurred around 1pm near the popular “Charlie Boy” bus stop involving the Toyota Corolla with registration number BWR 420 EY with two persons on board and a tipper carrying two persons as well.

An eyewitness said the two vehicles collided on the highway when the driver of the Toyota Corolla attempted a reverse against the traffic in total violation of traffic rules.

The driver of the tipper who was coming behind the Toyota was said to have rammed into the car and crushed it beyond recognition.

It was gathered that the truck collided with the car after several efforts made by the driver to avoid the accident. The two occupants of the Toyota in the process sustained minor injuries and were rushed to the hospital for medical treatment.

During a visit to the scene of the accident, a rescue team which included the officers of the Nigerian police and the Federal Road Safety Corps (FRSC) were on ground in an attempt to rescue the victims.

The incident led to a gridlock on the road as motorists were seen making diversion to alternative roads.

Meanwhile the sympathisers who thronged the scene called on the relevant authorities to put serious measures in place to check reckless driving on the highways in the federal capital territory.