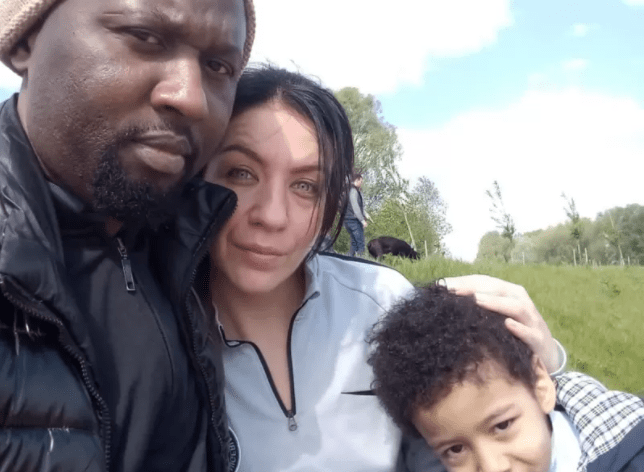 Former Super Eagles player and current Lobi Stars of Makurdi coach, Eddie Dombraye has revealed his wife and son are stuck in the ongoing war in Ukraine.

Dombraye told TheCable, an online newspaper in Nigeria that his wife and five-year old son are stuck at the train station in  Ukraine as they seek to find their way to Poland.

Since Russia’s attack on Ukraine on Thursday, thousands of foreigners and locals have attempted to cross to neighbouring countries including Poland. A one-time Super Eagles invitee based in Ukraine also revealed his experience.

“They were supposed to catch the train from Boryspil which is about 15 kilometers away from Kyiv, Ukraine’s capital, but the train was cancelled. They are currently looking for a different alternative,” he said.

Dombraye said he lived in Ukraine with his family before getting an offer to work as the Head Coach of NPFL side, Lobi Stars in September 2021.

He said his family – wife and two kids were billed to join him in Nigeria on Sunday but the crisis got worse and they were unable to. One of his children, who holds a Polish passport is also currently in Poland and was scheduled to join him.

“I have two kids and one of them is in Poland. He is a Polish citizen while the other one who is 5-year-old is currently with my wife,”

“I followed the crisis on CNN since the first day it started. My wife and I thought the war will not escalate as we never anticipated it was ever going to happen. Even my wife said there would be no fight or war. Now, she is blaming herself and I am also blaming myself, wishing they had relocated earlier.

“The worst part of it is that she has a Nigeria visa already. She was supposed to return as her flight originally was supposed to be yesterday to Nigeria, so, everything is so painful.

“We were both residing there. I have lived there since 2002. I based there like a dual citizen but moved down to Nigeria when I got the job as Lobi Star head coach in Nigeria. I have always wanted to come to Nigeria to coach. so, when I returned to Nigeria, I asked my wife to hold on for a few months until I am properly settled in the new space.

“Their flight was supposed to be yesterday. I returned to Nigeria on 6th of September 2021 as Lobi Stars football coach of Makurdi in the Nigerian Professional Football League ( NPFL).”

He rued the situation and said his inability to help his family at the moment is taking a toll on him. He however fronts a positive countenance in his managerial duties with his employers and players.

“As a football coach, I am trying to put on a brave face when I go out to meet my players but when I am indoors, it’s a different thing. It’s not like I am crying but I am feeling bad because I can’t actually do anything. With my 5-year-old kid trapped in a crisis area and I can’t help, It’s very bad. That is the worst thing to happen to any parent,

“Yesterday, they were at home and today we decided to board the train that will take them to Lviv, a border town close to Poland so that my 18-year-old son who lives in Poland as a citizen would pick them up but the train was cancelled. They are currently looking for other alternatives to get there.

“I am worried because getting there is about 12 hours and it’s not a fast train. it’s now all these locomotive trains and I am worried about their safety while on the way. Right now, they are at the train station.”

Dombraye had his playing career in Nigeria, Ukraine and Poland and worked as a coach with Ukrainian club, Arsenal Kiev before returning to Nigeria.

He was capped by the Super Eagles once and featured in the World Youth Championship hosted by Nigeria in 1999.