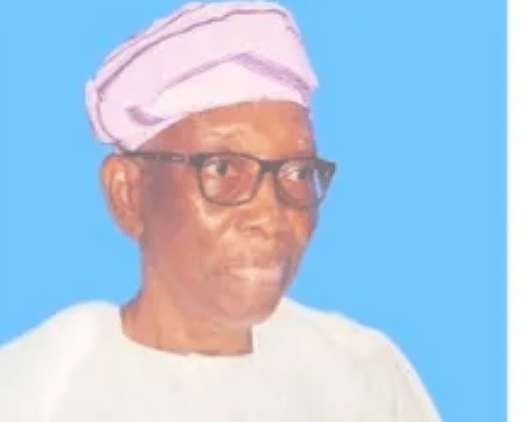 Former Minister of State for Power and Steel in Nigeria, Oyekunle Oluwasanmi is dead. This was announced in a statement by his family on Thursday.

The statement revealed that Oluwasanmi died on Thursday, July 14, 2022 at the age of 85 years. Oluwasanmi was appointed as the Chairman of the Board of the News Agency of Nigeria (NAN) in 1992. He was also a Board Member of several companies including Kinley Securities Limited and Wise Health Services Limited.

The statement added: “In 1995, in recognition of his sterling administrative skills, he was appointed by the Federal Military Government as a member of the Committee for States and Local Governments creation.
“He was part of a committee that advocated for the creation of Ekiti, Ebonyi, Nassarawa, Gombe, Zamfara and Bayelsa states in 1996.“In recognition of his solid administrative prowess, he was appointed Minister of State for Power and Steel in 1997. Under his watch, several reforms which positively impacted the nation’s Power and Steel sector were introduced.

“A community leader worthy of emulation, the late Chief Oyekunle Oluwasanmi was the Customs & Excise Area Administrator for Tin Can Island Ports and subsequently at Calabar Ports. While in the Customs Service, He attended various training programs abroad and represented Nigeria at roundtable discussions on Customs operations in Finland, Austria, Belgium, Bulgaria, Peru, Kenya and Australia.”

He bagged several awards in the course of his career. He retired voluntarily in January 1987, after years of meritorious service to the country and subsequently co-founded the law firm of Ibironke, Oluwasanmi & Co. along with his friend, late Mr Adejuyigbe Ibironke.
The late Oluwasanmi was from Ipetu Ijesha in Oriade Local Government Area of Osun State, where he was actively engaged in community-building initiatives till the very end. His brother, the late Professor Hezekiah Oluwasanmi, was a former Vice-Chancellor of the University of Ife (now Obafemi Awolowo University), Ile-Ife, Osun State, from 1966 to 1975.

The late Oluwasanmi attended St’ Paul’s Primary School, Ipetu-Ijesha, and later Ilesa Grammar School for his secondary education. Chief Oluwasanmi worked briefly with the Ministry of Health as a clerk in the old Western Region and then proceeded to study law at Obafemi Awolowo University Ile – Ife in 1963 and subsequently at the Nigerian Law school Lagos. After his call to the bar, he joined the Nigeria Customs Service, where he had an excellent and productive career.The late Oluwasanmi is survived by his wife, Mrs. Grace Fehintola Oluwasanmi – (Nee Ayeni), children and grandchildren.

How four men gang-raped my daughter for five days