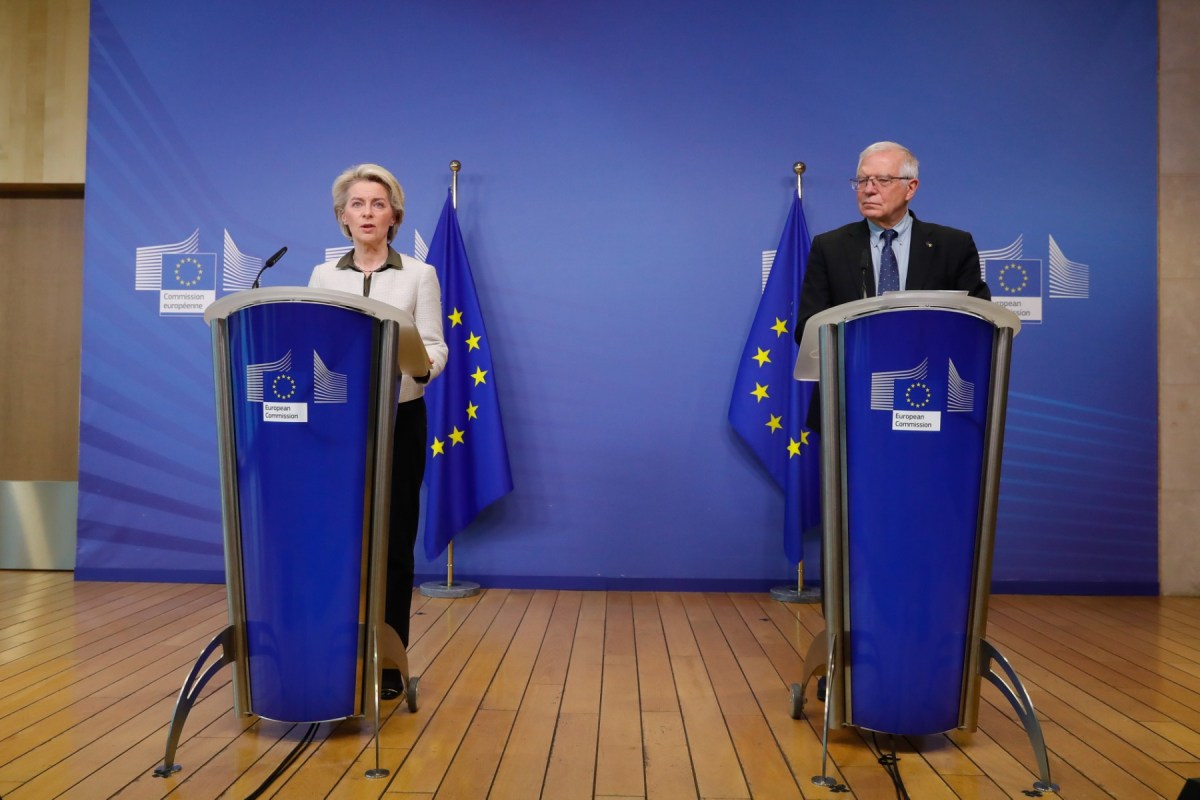 The EU on Sunday announced swingeing new sanctions against Russia over its invasion of Ukraine, closing its airspace to Russian aircraft and banning Russian state media outlets broadcasting in the bloc.
EU chief Ursula von der Leyen, announcing the measures, also said the European Union was taking the unprecedented step of financing arms to Ukraine, and was hitting Russian ally Belarus with sanctions for facilitating the invasion.
The measures come on top of sanctions von der Leyen announced a day earlier that are about to be implemented: cutting some Russian banks from the SWIFT interbank messaging network, banning all transactions with Russia’s central bank, and added restrictions on Russian oligarchs.
The EU has also sanctioned Russian President Vladimir Putin and his Foreign Minister Sergei Lavrov.
Together, the steps added up to the toughest stance the European Union has taken against a country, reflecting the bloc’s horror and anger at Putin’s assault on Ukraine, launched on Thursday.
“As the war in Ukraine rages on, and Ukrainians fight bravely for their country, the European Union steps up once more its support for Ukraine and the sanctions against the aggressor — Putin’s Russia,” von der Leyen said in a broadcast address.
She said the airspace ban would prohibit flights into or over the EU by “every Russian plane — and that includes the private jets of oligarchs”.
The measure consolidated what was already de facto largely in place, with many of the EU’s 27 nations individually announcing airspace closures to Russian flights.
– Stopping Russian ‘lies’ –
The move against Russian state media targeted its outlets Russia Today — known as RT — and Sputnik, and their subsidiaries.
Von der Leyen said they “will no longer be able to spread their lies to justify Putin’s war and to sow division in our Union”.
The EU’s foreign policy chief Josep Borrell, at her side, said the measure involved “banning Russia Today and Sputnik from broadcasting in the European Union”.
Sputnik responded with a sardonic statement saying: “We suggest the European Commission not stop halfway and ban the internet altogether.”
RT’s French subsidiary tweeted that the ban “goes against the very principles of freedom of expression” and said it was a victim of “censorship”.
Von der Leyen said the sanctions against Belarus were aimed at “the other aggressor in this war”, naming the regime of strongman Alexander Lukashenko.
“We will hit Lukashenko’s regime with a new package of sanctions,” she said.
“We will introduce restrictive measures against their most important sectors. This will stop their exports of products from mineral fuels to tobacco, wood and timber, cement, iron and steel.
“We will also extend to Belarus the export restrictions we introduced on dual-use goods for Russia.”
Belarusians helping Russia’s military operation would also be sanctioned, she said.
Von der Leyen said the decision to provide funding for the purchase and delivery of arms to Ukraine was “a watershed moment for our Union”.
Borrell said he would “propose to use the European Peace Facility for emergency assistance measures to finance the supply of lethal material to the Ukrainian army, as well as badly needed fuel, protective equipment and medical supplies”.
He said “we are doing this because this war requires our engagement in order to support the Ukrainian army — because we live in unprecedented times”.
Borrell was to chair a virtual meeting of the EU’s foreign ministers just after the declarations.
AFP

One Dead in New Violence at Zimbabwe Opposition Rally