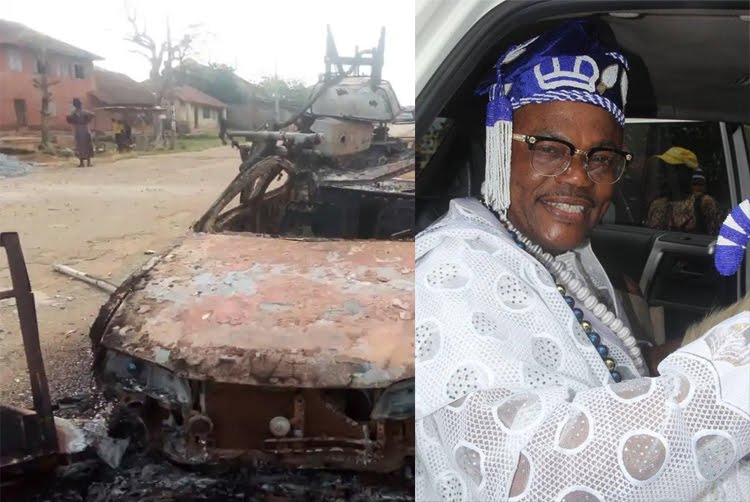 As a Traditional Ruler in Ekiti State was celebrating his coronation anniversary, some angry youths set ablaze the Palace and some houses belonging to his loyalists.

The Olorin of Orin, Oba Adeniran Ajibewa, from Ido-Osi Local Government has petitioned the Commissioner of Police, Mr Tunde Mobayo, on the incident, which he said was the handiwork of some youths in the community.

The petition explained that apart from the attack on the Palace, some of the loyalists of the Monarch also had their houses vandalized.

The petition titled ‘Complaint of Arson, Malicious Damage And Threat To Life,’ specifically identified 18 Indigenes of the community as suspects.

Oba Ajibewa wrote that “I wish to notify the Commissioner of Police about the nefarious act of the above named persons that invaded my palace.

“They damaged properties and burnt down part of the palace on the 20th of November, 2021, which was my coronation day,

“On Sunday 21st November, 2021, I had my coronation thanksgiving where the Catholic Bishop of Ekiti advised the congregation to cooperate with me so as to move the town forward.

“It was after my thanksgiving service in the evening, I was informed that John Ania a.k.a Oyinbo went to the neighbouring town Ido Ekiti on a bike and fell off the bike and was crushed by a moving vehicle that led to his death.

“I was reliably informed that the above named persons held meeting in the house of Adebowale Olofinro and after the meeting, went to my palace and destroyed my properties and that of my loyalists.

“Part of my Palace fence was demolished, the Palace was put on fire. Thanks to some of my loyalists in town that prevented the Palace from completely burnt down.

“One of my Chiefs, High Chief Clement Omoso’s car and bike were burnt down completely. Stones were thrown into the building thereby breaking glasses.

“Also the house of the Secretary of Ido/ Osi local government in person of Hon. Olumide Fadipe was damaged.”

For over a year since the appointment of Oba Ajibewa was confirmed by the State Government, the Orin community has been engulfed in crisis.

This has led to the postponement of the coronation anniversary, apparently to pacify aggrieved persons in the community.

It was gathered that apart from delayed coronation, Orin community has been without a monarch for over 10 years due to inability of ruling houses to agree on a candidate.

The Deputy Governor of the State, Otunba Bisi Egbeyemi, who presented the staff of office to Oba Ajibewa inside the Governor’s office in Ado Ekiti, has met with the warring groups severally urging them to accept the Monarch.