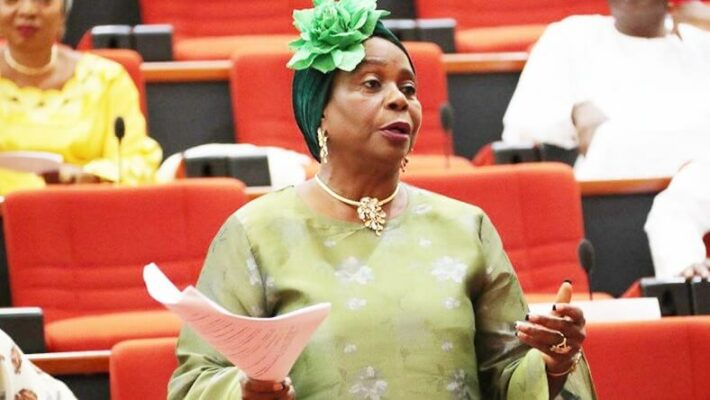 The lawmaker representing Ekiti South senatorial district, Senator Biodun Olujimi, has expressed regret and disappointment to the leadership of the People’s Democratic Party (PDP) over the handling of the party’s affairs in the state.

Olujimi who was a governorship aspirant during the January 26 primaries before she pulled out revealed that her faction in the party would make their next move known ahead of the June 18 poll on Sunday.

The former senate minority leader disclosed this in Ado-Ekiti, the state capital after a meeting with members of her faction to deliberate on alleged shoddy treatment and injustice meted out to her in the PDP governorship primaries and the resultant post-primary crisis.

She said that his faction had constituted a committee under the chairmanship of former Acting Governor, Tunji Odeyemi, to consult widely with her loyalists in all the 16 local government areas and turn in its report.

She maintained that her faction’s next line of political action would depend on the recommendations of the report to be submitted in the coming days which will be made public.

According to her, “So, we have briefed them and told them of the situation on the ground and they told us of what they think and their feelings. And we decided to set up a committee headed by former acting governor, Tunji Odeyemi with a timeline of three days in which to report back to us on what the large house has agreed to do. And then we will have a larger meeting on Sunday where we would take a proper decision and what we will do.

“There are options on the table. One, that we would all go and kneel down and beg former Governor Ayodele Fayose that we have sinned and we are returning back to his fold. Two, that we should pull out of the party. And we say that can’t be done in a hurry because tempers are high and we need them to calm to be able to talk and hold a big meeting on Sunday, January 13 when we would announce to the public where we are going.”

Olujimi expressed sadness that the party she sacrificed for its growth would pay her back with evils, adding that she was being treated badly by the PDP national leadership due to her gender.

“What the national did, is highly disappointing and unexpected. We are no longer children and we have been in this business for quite some time. If it is a former governor that is a sitting senator, can they do what has happened to me? No! My gender has affected and beyond that, the fact that people take everybody for granted has also affected all of us. You can’t take people for granted,” she said.

Olujimi dismissed as a ruse and monumental falsehood the claim by former Governor Fayose that he reached out to her for reconciliation, saying neither him nor anyone called her for peace talks.

“It was a pure falsehood. Fayose didn’t call me. All he only did was to post the pictures of Bisi Kolawole’s entry into Ado-Ekiti onto my phones. I saw them and I didn’t reply. It is when they speak to you that you know something is happening. I am not bothered because we have been in this business for a while,” the senator said.