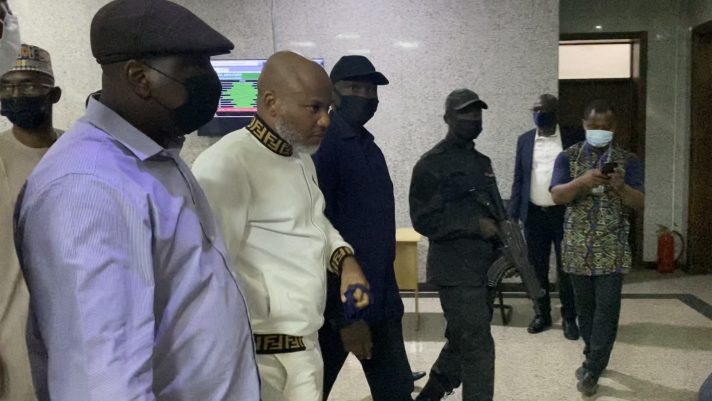 A Federal High Court, Abuja, on Monday, fixed Feb. 28 to hear a fundamental rights enforcement suit filed by the Leader of the proscribed Indigenous People of Biafra (IPOB), Nnamdi Kanu.

Justice Taiwo Taiwo fixed the date after counsel to the Department of State Services (DSS), Idowu Awo, informed the court that his clients had a counter affidavit that had not been served on Kanu.

Awo, at the resumed hearing prayed the court for more time to effect the service of the application on Kanu’s lawyer, Maxwell Opara.

But Opara described the request of the DSS lawyer as an attempt to continue to subject his client to solitary confinement and other inhuman treatments.

He argued that the counter affidavit by the DSS was already filed out of time.

He said even though the application was dated Jan. 28 and counsel to the DSS has his contact, it was not served on him until now.

Also the lawyer to the Attorney-General of the Federation (AGF), Simon Enock, informed that he had filed a motion for an extension of time to regularise their counter affidavit.

The application was neither opposed to by counsel to the IPOB leader, Opara, nor the DSS lawyer.
Justice Taiwo, who noted that the matter was coming before him for the first time, fixed the matter until Feb. 28 for hearing.

The News Agency of Nigeria (NAN) reports that Kanu, through his lawyer, Opara, had in the suit marked: FHC/ABJ/CS/1585/2021, sued the Director-General of DSS and the office as 1st and 2nd respondents respectively.

In the originating motion, his lawyer prayed the court to declare that the respondents while carrying out their lawful duties should abide by the provisions of Chapter 4 of the 1999 Constitution (as amended) and the Africa Charter on Human and Peoples Rights (Ratification and Enforcement) Act; as regards the rights of citizens of Nigeria.

Opara also urged the court to declare that Kanu, even though a detainee, was entitled to enjoy his freedom of thought, conscience and religion as guaranteed by the law.

He sought: “A DECLARATION that the applicant, even though a detainee, is entitled to the enjoyment of his right to dignity of human person as guaranteed under Sections 34(1)(a) of the 1999 Constitution (as amended).

“A DECLARATION that the respondents action in continuing to keep the applicant in their detention facility, without transferring him to Kuje Correctional Centre, is subjecting the applicant to mental torture given that it is not the place designated for keeping awaiting trial inmates,” among others.

But the DSS, in a counter affidavit deposed to by Hamza Pandogari, which was dated and filed on Jan. 28, disagreed with Kanu.

Pandogari averred that Kanu was arrested by personnel of the 1st and 2nd respondents upon reasonable suspicion of his engagement in acts of treason and terrorism by propagating violence against the people of Nigeria under the guise of succession.

The officer said Kanu was the leader of the proscribed organisation known as the IPOB.

He stated that he was currently standing trial on a 15-count charge before Justice Binta Nyako.

Pandogari, who said that though Nyako earlier admitted Kanu to bail sometime in April 2017, he jumped the bail but was rearrested to continue his trial.

The officer said contrary to paragraphs 4 (a) and (b) of Kanu’s affidavit, “there is no such order of court that applicant should have unrestricted access to the medical practitioner of his choice while in 1st and 2nd respondent’s custody.”

He also said contrary to the information, Kanu was receiving adequate and quality medical attention when necessary;
“The applicant enjoys direct and unrestricted access to medical practitioners who are experts in their various field of medical practice.

“That apart from the regular routine medical checkup, applicant gets promptly the required medical attention, upon any request or complaint by applicant relating to his heaith,” he said.
According to the officer, the applicant (Kanu) has never missed his trial based on health ground.

He said contrary to the information, the DSS had never tortured Kanu either physically or mentally while in its custody.

“That while in custody, applicant enjoys several privileges including but not limited to entertaining a total number of six visitors of his choice every week, three each on Monday and Thursday, the days set out by the court as applicant’s visiting days ” he added.

Friday, who averred that Kanu was not in position to professionally determined. The competency or otherwise of the medical practitioner attending to him in DSS custody, said the security agency “has a medical clinic well-equipped with highly trained medical personnel that have been attending to the medical needs of the applicant while he remains in the custody.”

He also denied that Kanu was being detained in solitary confinement.

According to Friday, he is being detained in a standard and hygienic facility.