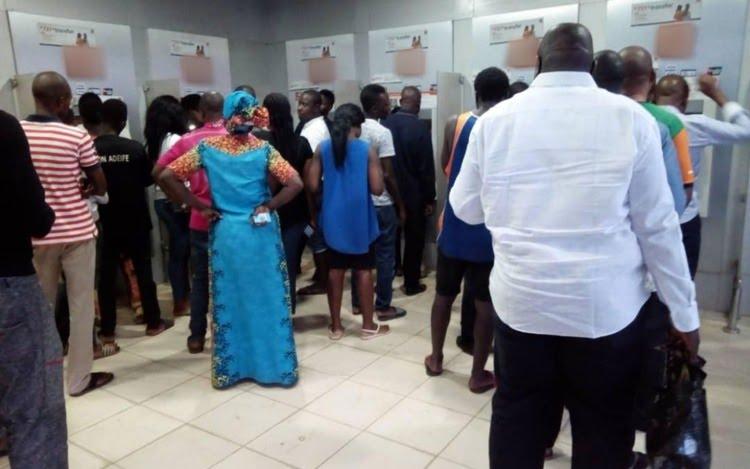 Mixed reactions greeted the disbursement of the new naira notes that officially went into circulation on Thursday with many bank customers demanding for the new notes while a few others snubbed the latest bills in banking halls across major Nigerian cities.

The newly redesigned N1,000, N500 and N200 bills finally became a legal tender on December 15, 2022, over three weeks after the President, Major General Muhammadu Buhari (retd.), unveiled them at the weekly Federal Executive Council meeting.
The CBN Governor, Godwin Emefiele, had on October 26 announced plans to redesign the N200, N500 and N1,000 notes, while also declaring that the old denominations would cease to be a legal tender by January 31, 2022.
Emefiele stressed that the redesigning of the local currency became necessary to tackle inflationary problems, currency counterfeiting, insecurity and other issues plaguing Nigeria.

He further noted that the currency redesign was aimed at controlling currency-in-circulation as well as ransom payments to kidnappers and terrorists.
A visit to banking halls in several cities across the country, especially in Lagos and Abuja on Thursday, showed that several bank branches had run out of the small quantities of the new notes allocated to them from their head offices as early as 12 noon.
Further findings revealed that several bank branches were yet to get their new note allocations with many bank officials informing our correspondents that the new notes were still being expected.
In bank branches visited in Lagos, a number of the bank branches had run out of their new note allocations when our correspondents visited the places. However, officials at some of the centres which still had the new notes saif their allocations were very small.

An official of Access Bank Plc at the Ojodu branch in Lagos, who spoke on condition of anonymity because he was not authorised to speak on the matter, said, “Each cashier was given N100,000 of the new N1,000 bill for onward disbursements to customers seeking over-the-counter payments. We don’t have the other denominations of N500 and N200 yet. We don’t have enough supply of the new notes for now.”
Also, it was observed that the ATMs at the bank branch were dispensing only old naira notes.
Customers were also seen depositing the old bills over the counter, while cashiers were paying out more of the old naira notes at the centre.

However, in a few instances, the cashiers were seen mixing a few new naira notes with the old bills in their OTC payments.
Meanwhile, in some of the banking halls visited by our correspondents, some customers snubbed the new notes due to reports that some local traders were rejecting them as legal tender.
As such, some of the bank customers refused to collect the new notes for over-the-counter payments.
Confirming the situation, a bank teller in Ogba, Lagos said that, “Some customers have been rejecting the new naira notes whenever we give them; they said the new notes would not be collected from them in the market; they prefer the old notes.”

At the bank, a cashier told a customer demanding the new notes she had exhausted her allocation.
However, when the customer insisted on having his payment in the new notes, the cashier approached his colleague to demand for some.
“You are eager to get the new notes but many of the customers I attended to today refused to take it from me,” the cashier said.
Abuja banks
In the Federal Capital Territory, Abuja, only one of the 10 bank branches visited paid their customers using the new notes. Also, only one of the ATM centre dispensed the new naira notes among the several ATM galleries visited in FCT .
Guaranty Trust Bank, First Bank Plc, Zenith Bank Plc, Taj Bank and Access Bank Plc situated at Jabi Garage and the Central Business District were visited.
None of the tellers in the bank branches was seen paying their customers in the new notes via the counters.
However, only the Access Bank ATM in the area was seen dispensing new N1,000 and N500 notes.

It was observed that the ATM dispensed N1,000 in every N10,000 withdrawal.
At GTBank, Jabi branch, our correspondent observed that the ATM dispensed old N1,000 notes to customers.
At the counter of the same bank, a bank official who declined to give her name said that the new notes were not available.
She said, “No, you can’t make cash withdrawals of the new notes. The best we can do for you is to mix the amount you are withdrawing with old notes.”
Another official of the bank, she said OTC withdrawals were still being honoured in the old notes.
At the Zenith Bank, Jabi branch, an official asked our correspondent to come back on Friday or Monday for the new notes.
According to him, the new notes have yet to be distributed to the branch, adding they are hopeful it will get to the branch soon.
A similar scenario was witnessed at the First Bank and Taj Bank branches as officials said the new notes were not available when our correspondent visited the centres.
At Taj Bank, an official who refused to give his name, claimed the lender was disbursing the new notes to customers over the counter but not at its ATM stand.
However, as of 3:45pm when our correspondent visited the branch, only old notes were being given to their customers.

Lagos banking halls
Also, during a visit to some banks in the Ikotun-Egbe and Isolo areas of Lagos, it was observed that the ATMs were dispensing old notes.
A customer at First Bank ATM in Ikotun-Egbe said, “The ATMs are still not dispensing the new currency here, what we still collect is the old ones.”
A Point of Sale terminal operator in Igando area, who simply identified himself as Chibuike, said he could not get the new notes when he visited his bank earlier in the day.
Also, the First Bank branch at Yaba, Lagos, the ATMs were still dispending the old notes.
It was also observed that OTC payments were being made using the old notes.
A bank customer Mr James Oni, told our correspondent he was anticipating to see the new notes, adding that he could not get it in the banking hall.
Meanwhile, it was observed that several bank customers in Lagos and Ogun states could not access the new notes in their bank branches as of Thursday. However, others who were lucky got the new bills.