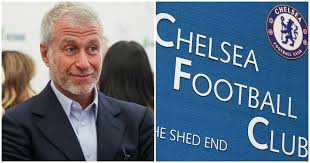 Chelsea have released a statement in light of Roman Abrahamovic’s decision to relinquish “stewardship and care” of the club.

The statement by Chelsea read “the situation in Ukraine is horrific and devastating.

” Chelsea FC’s thoughts are with everyone at Ukraine. Everyone at the club is praying for peace.”

The business mogul,who hails from Russia acquired Chelsea in 2003 and has seen the club grow in leaps and bounds.

The club have won five Premiership titles and two Champions League titles since his acquisition.

However following Russia’s invasion of Ukraine,he has been thrust into the public eye.

Mirror.co.uk reports that he is alleged to have ties with Russian President Vladmir Putin, which he vehemently denied,as a result his position as Chelsea owner has come under scrutiny in recent days.

Abrahamovic’s statement was as follows “During my nearly 20- year ownership of Chelsea FC,I have always viewed my role as a custodian of the club,whose job it is ensuring that we are successful as we can be today,as well as build for the future, while also playing a positive role in our communities.

“I have always taken decisions with the Club’s best interest at heart. I remain committed to these values.

“That’s why today I am giving trustees of Chelsea’s charitable foundation the stewardship and care of Chelsea FC.

“I believe that currently they are in the best position to look after the interest of the Club,players,staff and fans.”