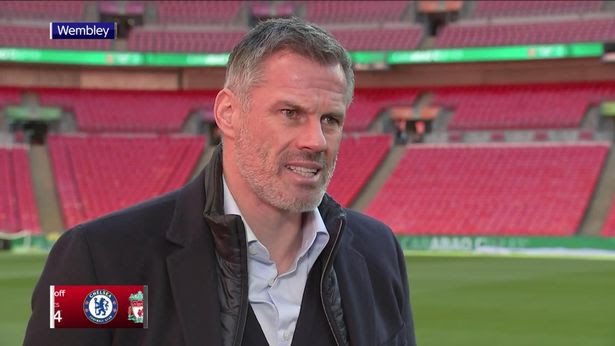 Jamie Carragher has condemned the statements from Chelsea and the embattled owner Roman Abramovic saying “they have embarrassed themselves.”
Abramovic gave a statement.on Saturday stating he was handing “stewardship and care” to the club’s charitable organization after Russia’s invasion of Ukraine.
The statement from Abramovic did not mention Russia or Ukraine, which was heavily criticised.
However Chelsea released a statement hours later which read “The situation in Ukraine is horrific and devastating. Chelsea FC’S thoughts are with everyone in Ukraine. Everyone at the club is praying for peace.”

Speaking to Sky Sports prior to the Carabao Cup final, Thomas Tuchel was asked if the statement reflected Abramovic’s view and said “Absolutely it includes him and this reflects my opinion like everyone else’s opinion in the club.”

But Carragher condemned Chelsea’s handling of the situation and claimed they’ve let themselves down.
“I don’t think they’ve handled it really well. With the couple of statements they’ve put out. I think it’s been really poor and they’ve let themselves down badly.
“The club came out today and put a statement out, but I think it was almost trying to rectify what Roman Abramovic had put out the night before. I don’t think they did that well either. It’s not worked out well for them at all,I think they’ve embarrassed themselves.”
Carragher also stated that Abramovic handing over stewardship and care means Abramovic is still in charge.

“They should have been a lot stronger in what they said, and regarding Roman Abramovic passing on to Chelsea trustees,that’s not him relinquishing the club, stewardship is not ownership.
“It’s completely different because he’s still in charge, he’s still running it, which is fine. But to not mention in his initial statement what is going on in Ukraine,I thought was really poor.”

Carabao Cup Final:’Blame Me For Chelsea Defeat To Liverpool’ —Tuchel