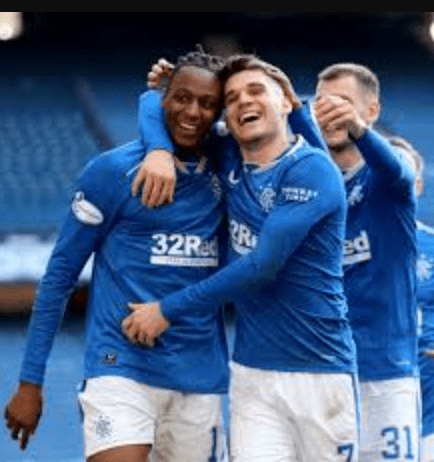 Rangers had a forgettable weekend after surrendering a two-goal lead at home to draw 2-2 against Motherwell and the reigning champions were keen to make amends at the McDiarmid Park.

Rangers manager Giovanni van Bronckhorst included the Gers’ three Nigerian imports – Leon Balogun, Joe Aribo, and Calvin Bassey – in his starting lineup as he knew another slip up could allow Celtic extend their lead at the top of the Scottish Premiership.

And just two minutes in with the home side having barely had a touch, the Gers were ahead thanks to Glen Kamara.

Alfredo Morelos’ clever flick from a Connor Goldson through ball sent the Finland midfielder clear behind the Saints defence and he did well to side-foot past goalkeeper Elliot Parish from 12 yards.

It was a great start for Gio van Bronckhorst’s side and it was a lead they held onto to the very end to stretch their unbeaten run against the Saints to 15 in all competitions.

The most cheering news of the evening for Nigerian fans, however, has to be Balogun’s return to full fitness following the injury that kept him out of the squad to the 2021 Africa Cup of Nations. The former Mainz defender was on the pitch for the entire duration of the encounter on Wednesday.

With Ola Aina, William Troost-Ekong, and Chidozie Awaziem struggling for game time at their respective clubs, Balogun’s match readiness is a boost for the Augustine Eguavoen-led Eagles.