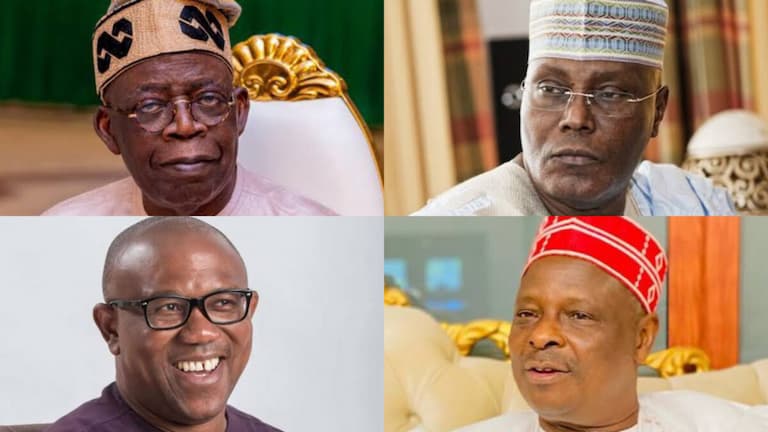 The country’s registered voters stand at 84,004,084, according to the figure released in August by the Independent National Electoral Commission (INEC).
With the commencement of the campaigns, the 18 contenders have 147 days to move round the country to promote their candidatures.
The electoral body has fixed the presidential and National Assembly elections for February 25, 2023.
Daily Trust reports that the candidates, their supporters and political parties have lined up various activities for the commencement of the public campaign.
PDP to inaugurate council today
The Peoples Democratic Party (PDP) has lined up a series of events to kick start its campaign. Atiku is expected to launch three books as part of his plans to sell himself to the Nigerian public.
The book will be followed by the unveiling of the campaign council and the official commencement of activities by the council towards the 2023 elections.

On Tuesday, Atiku was in Enugu to meet with members of the party from the South East.
Ikpeazu, Nnamani snub Atiku’s S/East meeting
The crisis rocking the PDP seems to be far from over as the governor of Abia State, Okezie Ikpeazu and some party chieftains shunned a meeting convened by its presidential candidate, Atiku, in continuation of his consultations with stakeholders across the six geo-political zones.
The meeting, which was held in Enugu, had the host governor, Ifeanyi Ugwuanyi, in attendance as well as the newly appointed chairman of the PDP Board of Trustees, Senator Adolphus Wabara; national secretary of the party, Senator Samuel Anyanwu; governorship candidates of the party in Abia, Enugu and Ebonyi states and some senatorial and House of Representatives’ candidates.
However, Ikpeazu, a strong ally of Rivers State governor, Nyesom Wike, was not at the meeting.
Wike and members of his group, last week, announced their withdrawal from the Atiku Presidential Campaign Council, insisting on the resignation of the national chairman of the party, Iyorchia Ayu.

Abia State Commissioner for Trade and Investment and immediate past commissioner for information, Chief John Okiyi Kalu, said Governor Ikpeazu was not at the PDP stakeholders meeting because he returned from a foreign trip yesterday afternoon.
He said the PDP governorship candidate and other stakeholders from the state attended the meeting.
The lawmaker representing Enugu East Senatorial zone, Senator Chimaroke Nnamani, was also not at the meeting.
The former Enugu state governor, who is seeking a return to the Senate on the platform of the PDP, was named among the 422-member council of Tinubu campaign.
However, a close source to the senator said he remained a proud member of the PDP but “will do all within his power to support his friend at the poll”.

APC postpones presidential campaign kick-off
The APC Presidential Campaign Council has postponed the commencement of its campaign, earlier slated for today.
The director, Media and Publicity of the council, Bayo Onanuga, in a statement, said the council would commence its official campaign on Wednesday with a prayer session and peace walk in Abuja, in line with the 2023 timetable of the INEC.
But in a statement on Tuesday in Abuja, the Director-General Tinubu/Shettima Campaign Council and Plateau State governor, Simon Lalong, announced the postponement, saying it was to create room for the inclusion of more party chieftains into the council.

The national publicity secretary of the party, Comrade Arabambi Abayomi, who claimed that LP has become the most sought-after party, said the council would be populated by men of integrity.
NNPP kicks off campaign next week
The New Nigeria Peoples Party (NNPP) will kick off its campaign a week late as it is still strategising on how to commence its quest to win the 2023 elections.
The national publicity secretary of the party, Dr. Agbo Major, in a phone chat with our reporter, said the party is looking at flagging off its campaign in the North Central a week from today, adding that the party has already drawn up its itinerary around the country.

“We are set. We have just finished work on our manifesto, to bring it up to date with the current reality and we have also just finished training of our social media actors and as I speak to you now, we have a total of 29,600 social media accounts across all platforms and that is intimidating enough to overrun all other political parties, including the party in power,” he said.
Daily Trust