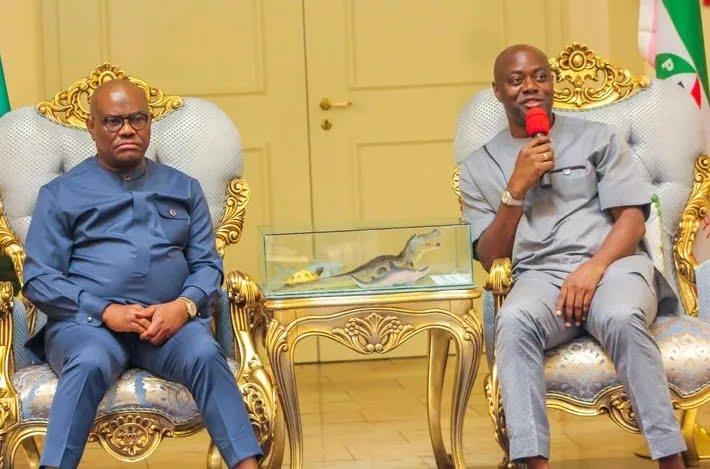 The People’s Democratic Party (PDP) has finalised plans to inaugurate its presidential campaign council on Wednesday, September 28, regardless of the withdrawal of some party heavyweights and prominent campaign council members led by Rivers State Governor, Nyesom Wike.

The party revealed that all its programmes would be carried out as scheduled, adding that it had no plan to suspend them for any reason.

The National Publicity Secretary of the party, Debo Ologunagba, disclosed this in Abuja on Thursday.

The party made this position known after a series of meetings by its leadership between Wednesday and Thursday, following the pullout of the Wike-led group.

They hinged their decision on the refusal of the party chairman, Iyorchia Ayu, to resign from office, insisting that the position must come to the South for balance, justice, and equity.

The development compelled the PDP National Working Committee to summon an emergency meeting where the options before the party were discussed and decisions taken.

When asked if the inauguration of the campaign council slated for Wednesday would go on as scheduled, Ologunagba said, “All programmes of the party are on and we have no plan to stop.”

Describing the PDP as a party of law and order, the image-maker stressed the importance of playing by the rules at all times.

The constitution of our party is supreme and the conduct of our affairs must align with it. Again, we are a party with tremendous respect for the law. So, all we have set out to do will take place as there is no reason whatsoever to do otherwise,” he added.

It was gathered that the National Working Committee has in the past 24 hours enjoyed tremendous support and goodwill from other organs of the party, particularly the National Executive Committee and the Board of Trustees.

The two organs were said to have expressed the willingness to play reconciliatory roles between the party and the pro-Wike group.

Chieftains back party
A former governor of Jigawa State and member of NEC, Sule Lamido, said, “Whatever the party says, that is our position.”

A former governor of a North-West state who did not want his name in print advised Ayu to remain calm, stressing that the vast majority of PDP members are behind him.

“The chairman was elected, not appointed and he was elected for a fixed term. He cannot be removed simply because a few powerful stakeholders want him out. So, I advise him (Ayu) to remain calm. This challenge will be over in no distant time,” he assured.

Another member of NEC, Dr Eddy Olafeso, echoed the position of the party spokesman, calling for respect for the party’s constitution in the move to find a common ground.

He said, “There are thousands of prominent people in our party. Yes, those who pulled out of the campaign council are very important to us but the party is more important than individuals. The truth is, the party must not be trampled upon in a haste to please a number of people.

“We know the genesis of what is going on. People are trying to cause divisions in the party at this moment and this is very unfortunate.”

On whether the party would appoint replacements for Wike, Makinde, and others who pulled out of the campaign council, Olafeso had this to say, “The party will not wait for anybody. We won’t encourage absolutism and unilateralism. Our campaigns will commence with immediate effect as soon as the council is inaugurated next week.’’

A National Working Committee member, Timothy Osadolor, submitted that Wike’s withdrawal from the campaign council would not affect the party’s chances in the polls, noting that he is just a member among thousands of others.

“Sometimes the butterfly thinks he is a bird but he can never be a bird. Wike thinks he is the all and all of the PDP but he is not. Appropriating the attribute of God to himself is not necessary and it is far and above his capacity. Nigerians are not interested in who lost the primaries but those who have the solutions for the myriad of problems bedevilling the country,’’ he stated.

Speaking in an interview on Arise Television programme, Thursday, a former presidential aspirant of the party, Chief Dele Momodu admonished the Wike-led group to embrace forgiveness and desist from making Atiku look like a weakling.

He stated, “Forgiveness is nothing new. It is recognised in every religion that when people offend you and come to you, which I think Atiku has done, the rest is within the party and the aggrieved members.

“My own worry is that we seem to be putting so much pressure on Alhaji Atiku Abubakar as if he can unilaterally remove the chairman of the party. Even if he (Atiku) should do that, a lot of us will feel vilified. He cannot do it (remove Ayu) but all he can do is speak with Dr Ayu and we don’t know what is going on between all of them.’’

Responding to a question, he noted, “I know nobody will want to be seen in that light. Like anytime Governor Wike says you must go, you must go; it becomes a psychological thing as well for the party. It doesn’t work that way.

Some of these things we have discussed privately with some of our party members and we believe that nobody should attempt to make our candidate look so weak or like someone that just can be pushed around.

“I mean, can I go to Governor Wike’s state and just tell him to go and sack the state’s party chairman? He doesn’t have the power to do so. It can’t happen. So, that is my position.”