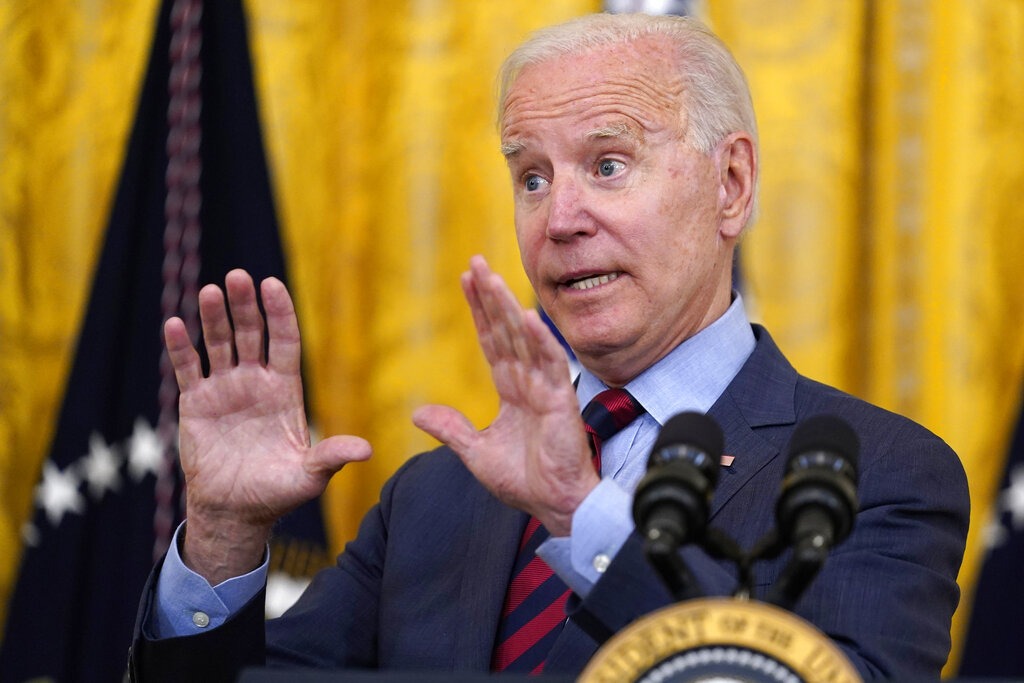 U.S. President Joe Biden warned Vladimir Putin that the Russian leader “has no idea what’s coming”, as Western nations tightened an economic noose around Russia, whose invading forces bombarded Ukrainian cities and appeared poised for an advance on Kyiv.

Hundreds of thousands of Ukrainians have fled the fighting since Putin ordered a full-scale invasion nearly a week ago, with a miles-long Russian military convoy north of Kyiv readying to advance on the capital.

Yet, Russia has failed to capture a Ukrainian single major city and Western analysts say Moscow appears to have fallen back on tactics which call for devastating shelling of built-up areas before entering them.

“While he may make gains on the battlefield – he will pay a continuing high price over the long run,” Biden said in his State of the Union address. Straying from the prepared text, Biden added “He has no idea what’s coming.” He did not elaborate.

U.S. lawmakers stood, applauded and roared, many of them waving Ukrainian flags and wearing the country’s blue and yellow colours, as Biden delivered his address to the chamber of the House of Representatives. read more

A senior U.S. defense official said on Tuesday the invading force’s advance on Kyiv has stalled due to logistics problems, including shortages of food and fuel, and some units appeared to have low morale.

The official, who spoke on condition of anonymity, told reporters that it was unclear whether the convoy itself had stalled, but it was not making much progress. read more

“It’s necessary to at least stop bombing people, just stop the bombing and then sit down at the negotiating table,” he told Reuters and CNN in a joint interview in a heavily guarded government compound in Kyiv.

The United Nations General Assembly is set to reprimand Russia on Wednesday for invading Ukraine and demand that Moscow stop fighting and withdraw its military forces, a move that aims to diplomatically isolate Russia at the world body.

By Tuesday evening nearly half the 193-member General Assembly had signed on as co-sponsors of a draft resolution ahead of a vote on Wednesday, diplomats said. The text “deplores” Russia’s “aggression against Ukraine.” read more

Putin ordered the “special military operation” last Thursday in a bid to disarm Ukraine, capture the “neo-Nazis” he says are running the country and crush its hopes of closer ties to the West.
CIVILIAN CASUALTIES

Russia’s assault included strikes on Kyiv, though the heaviest bombardment so far appeared to be around Ukraine’s second-largest city Kharkiv, near the border with Russia.

Dozens of residents there, including children, were killed when a Russian strategic bomber fired 16 guided missiles toward a residential area on Monday, Ukraine’s defence ministry said.

West of Kyiv, in the city of Zhytomyr, four people, including a child, were killed on Tuesday by a Russian cruise missile, a Ukrainian official said.

In Ukraine’s largely Russian-speaking city of Donetsk, in territory controlled by Russian-backed separatists, authorities said three civilians had been killed by Ukrainian shelling.

Reuters was not able to confirm any of the reports of casualties. The United Nations says at least 136 civilians have been killed in the invasion, but that the real number of people is likely much higher.

Vastly outmatched by Russia’s military, in terms of raw numbers and firepower, Ukraine’s own air force is still flying and its air defences are still deemed to be viable – a fact that is baffling military experts.

“The airspace is actively contested every day,” a senior U.S. defense official said, speaking on condition of anonymity. read more

Biden announced a further ratcheting up of sanctions on Moscow, joining the European Union and Canada in banning Russian planes from U.S. airspace. He also said the Justice Department would seek to seize the yachts, luxury apartments and private jets of wealthy Russians with ties to Putin.

Following a call with Group of Seven officials, Treasury Secretary Janet Yellen said the United States had agreed with G7 partners to convene a task force “to freeze and seize the assets of key Russian elites”.
Ukraine, a Western-leaning democratic country of 44 million people which is not a member of NATO, has called on the U.S.-led military alliance to implement a no-fly zone over Ukraine – a request rejected by Washington, which fears stoking a direct conflict between the world’s two biggest nuclear powers.

Washington and its allies have instead sent weapons to Kyiv.

Several dozen Japanese men have answered a Ukrainian call for foreign volunteers to fight Russia’s invasion, according to a media report on Wednesday.

Isolating Russia diplomatically, the West’s main strategy is shutting off Russia’s economy from the global financial system, pushing international companies to halt sales, cut ties, and dump tens of billions of dollars’ worth of investments.

Exxon Mobil joined other major Western energy companies including British BP PLC and Shell in announcing it would quit oil-rich Russia over the invasion.

Apple Inc stopped sales of iPhones and other products in Russia, and was making changes to its Maps app to protect civilians in Ukraine. Alphabet Inc’s (GOOGL.O) Google dropped Russian state publishers from its news, and Ford Motor suspended operations in the country.

Russia on Tuesday placed temporary restrictions on foreigners seeking to exit Russia assets, meaning that billions of dollars worth of securities held by foreigners are at risk of being trapped.