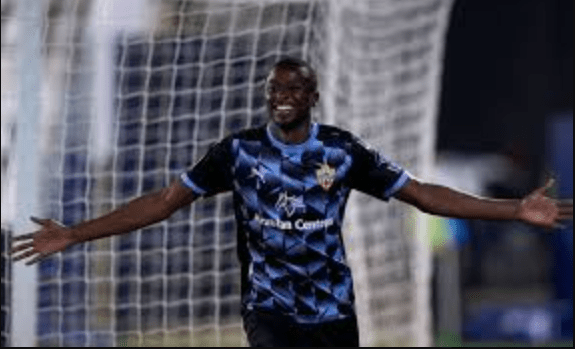 Umar Sadiq smashed home a brace in a man-of-the-match display for Almeria, but Lugo came from behind thrice to secure a thrilling 3-3 draw at the Estadio Mediterraneo on Saturday.

Almeria knew a win could lift them past Eibar at the top of the table, and the home side deployed their best legs against their mid-table opponents, with Sadiq at the tip of their attack.

Fresh from scooping the La Liga Smartbank Player of the Month award for February, the Nigerian striker is not short on confidence at the moment.

And he showed his full quality with the match’s opening goal after just 13 minutes, but Ricard Sanchez drew Lugo level shortly before the break.

Sadiq struck again five minutes after the restart to hand La Union the lead again – his 15th league goal of the season that takes him to the top of the Pichichi table.

Once again, Lugo pegged the home side back in the 66th minute through Pablo Claveria.

Claveria then turned from hero to villain moments later when he scored an own goal to restore Almeria’s lead, but Carrillo’s 80th-minute effort ensured a pulsating encounter would end with no winner, no vanquished.