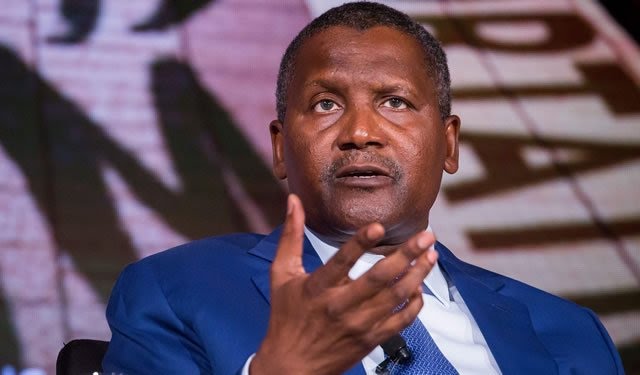 Aliko Dangote and Roman Abramovich
Africa richest man, Aliko Dangote’s net worth has risen by $934 million since the first trading day of the current calendar year, making him the 83rd richest person globally.

According to Bloomberg, the African billionaire businessman’s total fortune is now worth $20 billion, letting him overtake Russian businessman and owner of Chelsea Football Club Roman Abramovich on the publication’s billionaires list.

Much of Dangote’s net worth is tied up in his flagship company Dangote Cement Plc, meaning it rises and falls with the company’s stock price. The Nigerian billionaire’s wealth rose following a year-to-date price increase in the shares of Dangote Cement Plc announced it would buy back up to 170 million shares, or 1% of its issued shares, over two days from Jan. 19. Since the commencement of the share buyback program, the company’s shares have soared by 7% on the Nigerian Exchange, thanks to stockbroker buying activities and investor reactions.

Dangote has repeatedly spoken of his desire to purchase Arsenal Football Club, saying last year he intended to launch a bid for the English Premier League team. In an interview with Bloomberg last year, the Nigerian billionaire explained that he would look into buying Arsenal once construction had been completed on his oil refinery, which is set to become operational in Q3 2022.

The Dangote Group believes that the pipeline Infrastructure, which cost an estimated $19bn to build, is designed to process enough crude to meet Nigeria’s fuel demands and turn Africa’s largest crude producer into an exporter of refined crude. In addition, the world-class industrial complex will create a market for $11 billion per annum of Nigerian crude.