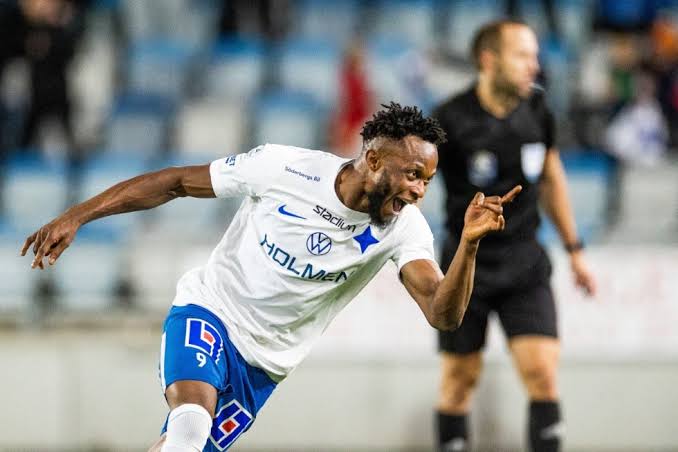 The Nigerian star was the best striker in Sweden last season, but he has opted for a move away from the Allsvenskan

Swedish side IFK Norrköpings have confirmed that Nigerian striker Samuel Adegbenro has joined a Chinese side, but they refused to state his destination.

Adegbenro joined Norrköpings at the beginning of last season. The 26-year-old was more of a risky buy for The Comrades, as he had a poor season with Rosenberg before his move to Sweden.

However, the risk paid off, as he was the most prolific goalscorer in the Allsvenskan last season. He scored 17 goals and assisted two in 30 appearances to help Norrköpings to a seventh-placed finish in the Swedish top-flight.

His performances earned him a lot of interest in Europe, but a move away from Nya Parken did not materialise in the transfer window.

However, Norrköpings have confirmed that his time with them has ended, as they announced his sale to a Chinese side.

However, according to reports from Football Fans stuff, the club could be Beijing Guoan.

If the deal eventually pulls through, Adegbenro would become the second Nigerian player to ever feature for Beijing Beijing Guoan after former Super Eagles star Peter Utaka who featured for them in the 2014/15 season.

Onazi, Awaziem and the surprises in Super Eagles Squad to face Ghana