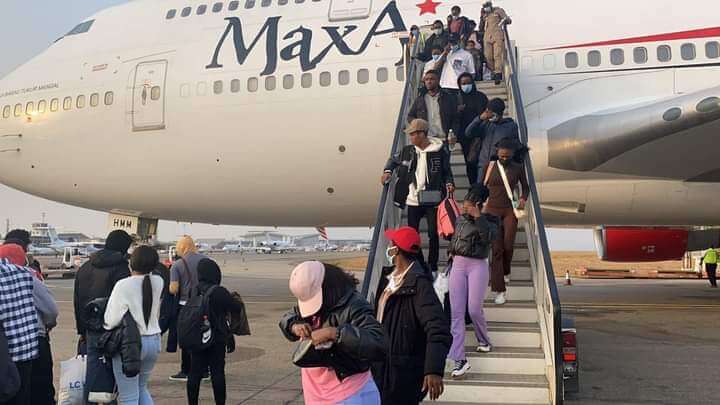 This came on a day a coalition of 165 Nobel laureates, including Nigeria’s Wole Soyinka, openly condemned the Russian Federation led by Vladimir Putin, for its “unprovoked military aggression towards Ukraine.”

The evacuees arrived on three flights to Abuja with the first batch of 450 from Romania landing at the private jet terminal of the Nnamdi Azikiwe International Airport, Abuja at 7:10 am via Max Air.

The evacuees were mostly students who fled Ukraine to Romania, Hungary and Poland following Russia’s invasion of the Eastern European country.

The arrival of the Nigerians is a welcome relief after initial reports that they and other Africans were being ill-treated and prevented from leaving Ukraine through the Polish border.

President Muhammadu Buhari, who condemned the ugly development, said there were about 4,000 Nigerians in Ukraine, mostly students.

He said one group had repeatedly been refused entry to Poland so they travelled back into Ukraine to head for Hungary instead.

According to President Buhari in a tweet, “All who flee a conflict situation have the same right to safe passage under the UN Convention, and the colour of their passport or their skin should make no difference.”

Some of the evacuees who spoke to journalists on arrival yesterday appreciated the federal government for its efforts in ensuring they were safely evacuated but narrated the pains they had to go through to get out of Ukraine.

Wegwu Kella, a female Nigerian from Rivers State and student said it was a bitter/sweet feeling leaving Ukraine back to Nigeria.

She said: “I feel Ukraine has been home and since my arrival in that country, things have been working out well but I feel I am safe and returning to Nigeria to meet loved ones. I was really in another city when the bombing started. The social media was awash with news of the impending attack so I had left the capital city. When I was leaving for the border, I was in the cold and had to walk for six hours straight to get to the gate and on getting to the gate they were allowing only Ukrainians to pass and I had to leave and get a bus to another border point. This took another 24 hours to get to but this time around I was in a bus.

“I cannot explain how I got here because I was going to miss the flight, I went to the embassy yesterday to register and I got to the airport and was told the plane was full. I waited to see if any opportunity arises and today because I was in front of the line I was able to make the flight.”

Another evacuee, Eniola Badejo, also a student appreciated the government’s efforts, but appealed for more information and better coordination as the exercise continued.

She said: “We thank our government because it has been really tiring, we went through a lot of stress, many of us travelled all the way and we barely slept. I am just happy going back to my family.”
Nigeria’s Ambassador to Poland, Christian Ugwu appreciated President Buhari for his swift intervention and release of funds to get all stranded Nigerians in Ukraine back home.

Ugwu said the embassy in Poland was on top of the situation and had successfully coordinated the first batch that was being evacuated already.

The ambassador, however, urged all Nigerians who had made it to Poland to ensure they got ready to be evacuated home rather than remain in Poland.

Amb. Bolaji Akinremi, leader of the evacuation exercise from the Ministry of Foreign Affairs, explained that the March 3 flight was cancelled due to delay in getting all the intending evacuees together from their respective hotels.

Akinremi explained that as at when they were ready, the International law did not allow for the crew members to continue with the journey as they had overshot their duty time.

A coalition of 165 Nobel laureates, including Wole Soyinka, Friday openly condemned the Russian Federation, led by Putin, for its “unprovoked military aggression” towards Ukraine.

This was stated in an open letter jointly signed by the Nobel laureates, who stated that there were other peaceful ways to solve disputes.

The scholars also noted that the invasion “will stain” the international reputation of the Russian state for decades to come.

A copy of the letter made available on Vox Ukraine partly read: “In a move that recalls the infamous attack of Nazi Germany on Poland in 1939 (using similar tricks of feigned provocation) and on the Soviet Union in 1941, the government of the Russian Federation, led by President Putin, has launched an unprovoked military aggression — nothing else but a war – against its neighbour, Ukraine.

“We choose our words carefully here, for we do not believe the Russian people have a role in this aggression.
“We join in condemning these military actions and President Putin’s essential denial of the legitimacy of Ukraine’s existence.

“There is always a peaceful way to resolve disputes. The Russian invasion blatantly violates the United Nations Charter, which says all members shall refrain in their international relations from the threat or use of force against the territorial integrity or political independence of any state.

“It ignores the Budapest Memorandum of 1994, which obligated Russia and others to respect the sovereignty, independence, and existing borders of Ukraine.

“The Russian invasion will stain the international reputation of the Russian state for decades to come. It will pose barriers to its economy and inflict hardships on its population. The sanctions imposed will restrict the ease of movement of its talented and hardworking people in the world. Why raise this fence between Russia and the world now?

“Hundreds of Ukrainian soldiers, Russian soldiers, and Ukrainian civilians, including children, have died already. It’s so sad, so unnecessary. We gather in this appeal to call upon the Russian government to stop its invasion of Ukraine and withdraw its military forces from Ukraine.”

Reinstating their support for Ukraine, the scholars said, “We respect the calm and the strength of the Ukrainian people. We are with you.

“Our hearts go out to the families and friends of all, Ukrainians and Russians, who have died and been injured already. May peace come to this piece of our beautiful world.”

Russian forces seized control of Europe’s largest nuclear power plant yesterday after a battle with Ukrainian troops that caused a fire and fears of a catastrophic accident.

The Ukrainian nuclear regulator said that the fire had been extinguished and no radiation leak had been detected, with site staff still able to work at the Zaporizhzhia site.

“The Zaporizhzhia NPP site has been seized by the military forces of the Russian Federation. The fire was extinguished by the Ukrainian State Emergency Service units,” the State Nuclear Regulatory Inspectorate of Ukraine said in a statement.

Earlier, fighting had erupted between Russian invasion forces pushing towards the city of Zaporizhzhia and Ukrainian defenders, causing a blaze at the plant and global alarm.

The power station is located in southern Ukraine on the Dnipro River and produces a fifth of Ukraine’e electricity.

Any fire in a nuclear plant revives memories of the 1986 Chernobyl disaster, also in Ukraine, which left hundreds dead and spread radioactive contamination west across Europe.

Of the six reactors at Zaporizhzhia, the agency said, one is in operation and producing power, one has been turned off and four are being cooled to prevent overheating.

The regulator did not say, however, what each reactor’s status had been before the fire.
An on-site inspection is being carried out by Ukrainian staff.

Ukraine’s President Volodymyr Zelensky accused Moscow of resorting to “nuclear terror” by risking a repeat of the Chernobyl disaster and begged world leaders to back Kyiv.

He said: “No country other than Russia has ever fired on nuclear power units,” he said in a video message released by his office. This is the first time in our history; in the history of mankind. The terrorist state now resorted to nuclear terror.”

Zelensky alleged that the Russian troops had knowingly fired on the nuclear facility.

“These are tanks equipped with thermal imagers, so they know where they are shooting,” said Zelensky.
Ukraine’s nuclear facilities have been a major point of concern since Russia’s military invaded the country last week and began bombarding cities with shells and missiles.

Buhari in Surprise Return to Abuja, Defers Departure for London Medicals Till Sunday