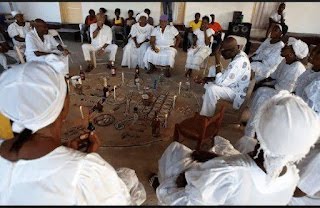 The White Witches and Wizards Association of Nigeria (WITZAM) had declared their support for the presidential candidate of the All Progressive Congress (APC), Bola Ahmed Tinubu and the party’s Muslim-Muslim ticket.

The support was announced by the spokesperson for the association, Chief Okhue Iboi on Friday.
Speaking to newsmen in Lagos, Iboi noted that the same faith candidacy had never been a problem in leadership.

Asked if Tinubu would win the election, Iboi said: “Tinubu is not just an ordinary man. He is a man who sees beyond his nose. When he sleeps, he would be told what to do and how to go about what he set out to do. I would not be surprised if he was told what to do, before settling down on his choice of running mate.”

On Witch Education: “When we talk about ‘white witches’ we are not talking about white men or white women, but we are talking about a division of witches. There are white witches, black witches and red witches. White witches defend their families; they bring progress and development to them. The black witches attack people, if you beg them, they will leave you, but red witches attack people even if you beg them, they will never listen.”

What you should know: Citing Abiola-Kingibe ticket that won the 1993 presidential election, the association, however, noted that the APC standard bearer, Bola Tinubu, and his running mate, Kashim Shettima, would encounter some challenges from opposition parties.