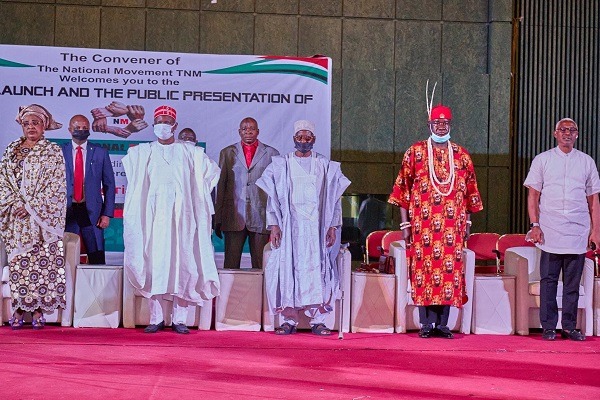 Former Gov. Rabiu Kwankwanso of Kano State and a group of prominent politicians on Tuesday launched a new political group -“The National Movement”, ahead of 2023 poll.

Speaking at the launch in Abuja, Kwankwaso, also the convener, said the movement was formed with a collective desire and commitment of Nigerians at home and in Diaspora to rescue the nation.

He said that the movement was formed by Nigerians from different religious, political and ethnic background in response to calls for a way out of the current economic and political situation in the country.

Kwankwaso said that the journey began in the summer of 2021, when a group of friends and associates met in Abuja under the auspices of Kwankwaso’s Friends to review the situation in Nigeria

He said that the group was worried about the future and direction of the Nigerian polity.

“We were fully aware that the mind of the average politician in Nigeria was focused mainly on the next election and how to win in the election irrespective of the circumstances.

“But for those of us who met and reviewed the state of the nation in the summer of last year, we had a different view.

Kwankwaso added: “While most of us would want to contest and win election, we resolved that we must do everything possible within our abilities to work together towards reversing the dangerous course Nigeria was heading towards.

He listed the core values of the movement to include trust, leadership, responsibility, equity, competence, trustworthiness among others.

“Furthermore, the movement shall: uphold the sanctity and dignity of human life; uphold the fundamentals of freedom and human rights.

“Restore the glory and prestige of Nigeria and Nigerians in the eyes of the world and consolidate Nigeria’s strategic alliances with our global friends and partners”, he said.

Speaking, Mr Solomon Dalong, a former Sports Minister, stressed the need for the movement to start mobilise Nigerians for unity and justice.

Alhaji Buba Galadima, said that the launch was his happiest moment and called on Nigerians to support the movement.