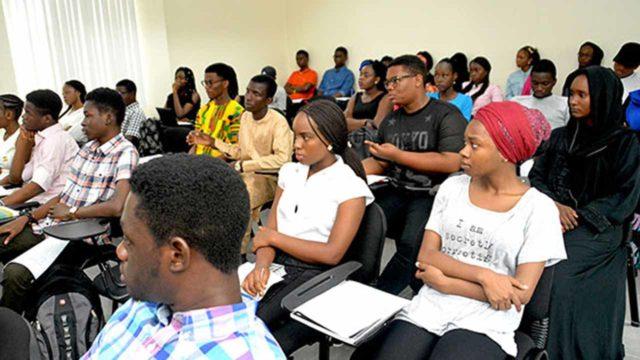 Nearly 13,000 Nigerian graduates and under-graduates students are currently seeking admission into universities in the United States across 1000 US universities.

This was disclosed by the U.S. Consul General Will Stevens at the 21st Annual EducationUSA College and Career Fairs organized in both Abuja and Lagos.
The students who were said to be exploring possibilities in studying in United States as well as partaking in the American higher education, expressed optimism of connecting to the global world.

This year’s Education USA College and Career Fair which took place in Abuja and Lagos was organized by the U.S. Mission and featuring visiting representatives from 25 universities and colleges from across the United States.
The Fair was augmented by talks by U.S. experts and Nigerian U.S. university alumni on college admissions and student visa application processes.
Speaking with the students, U.S. Consul General Will Stevens said that America remains a leading destination for international students, noting the United States offers students an unrivaled educational experience, flexibility, and diversity.

According to him, “Over the last two decades, EducationUSA College and Career Fairs have resulted in an increased number of highly qualified Nigerian applicants to U.S. institutions. Nearly 13,000 Nigerians are currently pursuing U.S. graduate and undergraduate degrees across 1,000 U.S. colleges and universities.
“Nigeria sends more students to U.S. colleges and universities than any other country in Africa and is the eleventh largest source country worldwide of international students to the United States. The vast majority of these students, upon graduation, contribute positively to Nigeria’s public and private sectors and civil society when they return”, he said.

Speaking on the theme “Exploring Opportunities Post-Pandemic,” Consul General Stevens noted that the role of the U.S. Mission in Nigeria is to facilitate and build connections between the United States and Nigeria. He added that one of the best ways these connections are built, and mutual understanding is fostered, is through educational exchange.
“We are happy to provide Nigerian students who wish to study in the United States a unique opportunity to learn about the diversity of the programs offered at various U.S. educational institutions,” he said.

Meanwhile, in both cities, Counselor of Public Affairs Adnan Siddiqi, U.S. Mission EducationUSA advisers, and Nigerian alumni of U.S. universities joined the visiting U.S. college admissions officers to speak about the benefits of American education and study abroad, and to answer questions about the college admissions process, standardized testing, financial aid, and scholarships and opportunities.